Football has been played at Boxford Playing Fields for over 100 years.

On Easter Sunday, 21st April 2019 the former players from the club of 40 years ago came together for a community day at the Boxford Playing Fields to commemorate their visit to the USA in 1979, when they were aged 12 and 13.

They celebrated the wonderful game with an afternoon's football plus refreshment and entertainment stalls for all the family to create another fabulous Boxford event!

Boxford postmaster Richard Haining, who went on the trip himself, organised the day and 12 players from the original youth team, including Karl McDermott, who now lives in Mexico, attended. Teams from other local football clubs joined in the fun, including a game of walking football, and there were stalls offering candy floss and face painting, as well as a bouncy castle. Scores of villagers turned out to support and take part in the event.

Richard Haining said: "The beer tent sold out, the barbecue sold out, as did the sweet stall. We could not have wished for a better day. Thanks go to everyone for their support."

"In 1979, 15 boys and 4 adults representing Boxford Junior Football spent two weeks in the USA playing the sport and having the trip of a lifetime. We visited New York; staying with families there and also visited and stayed with families in Boxford Massachusetts.
An amazing highlight was visiting the New York Cosmos stadium, going on the pitch and seeing their superstar players after they had trained. Soccer was really kicking off in the USA at that time. 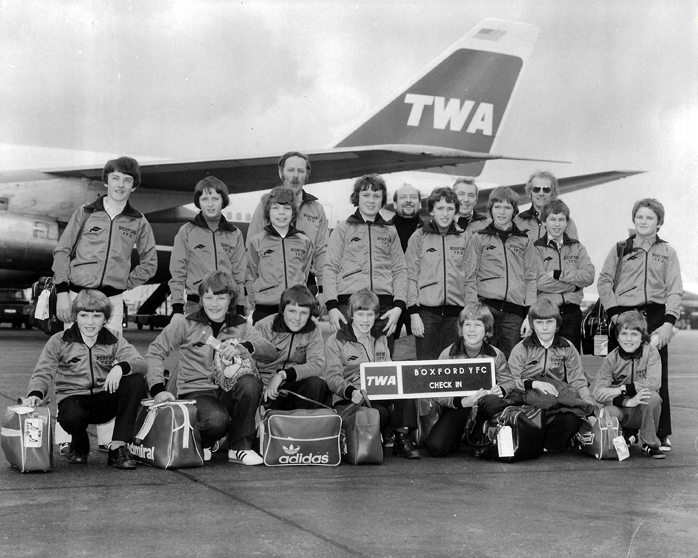 The group also went up the Empire State Building and the Twin Towers in New York City, plus had a day in the local high school which the kids we stayed with attended.
Out of courtesy to our hosts we lost every game to the American teams.

To be fair most of the players were older than us and some got in their cars after the game and drove their wife and kids home. (Much like playing any team from Haverhill back in the day)
Gordon Atkinson; who is still resident in the village, was the originator of the team in the 70's; training us on a Saturday morning at the Playing Fields and raising funds for the first kit. Once we had enough players of the age group to enter the Suffolk and Essex Youth League he handed over the baton to my late father Peter Haining, which meant I was either subbed or sub every game.
With the aid of the committee including Brian Porter (the chairman) and John Kent (who are also still resident locally) funds were raised for the American trip, our kit and of course ferrying the team all around East Anglia. We also had Mickey Cook the Colchester footballer attend our training sessions in the gym at the then Stoke by Nayland Middle School which we all attended.
As the photo in this issue shows, on the day prior to the trip to the USA trip we had a training session and our Tour Tracksuits presented to us by Tony Woodcock the England striker. He was with Nottingham Forest at the time and he brought the League Cup they had recently won along with him.

Cue loads of photos with over excited lads in front of the local press including Steve Ryder - not that any of us knew who he was then.

Boxford Youth continued up to Under 15's then the younger ones of us joined forces with Nayland Eagles.

When we played at Boxford 40 years ago there were no proper changing rooms and only one pitch - full size. We stone picked the field next to it (they were originally divided by a big hedge) and turned it into the current 11 aside pitch past the allotments. The original pitch where the cricket pitch is now used to have a crater just outside the goal area at the North end into which every wet season water would gather. The puddle was a feature of any Boxford winter game and no game was ever called off due to its presence; you just played round it. or; as we got older, deliberately into it! The aim being then to kick as much water over each other (and the opposition) whilst retrieving it.

There was an age group below ours formed and from that year group the Boxford Rovers original junior team was formed. "