The smock mill was built in 1788. The annular sails were fitted in 1861 but these were blown off on Black Tuesday, 18th January 1881. They were replaced by normal shuttered sails. The mill was destroyed by fire in 1901. Houses now stand on the site.

This mill is one of the few to have gained fame beyond its immediate neighbourhood, for the reason that it was one of only four mills to have been fitted with an annular sail, and was referred to in several letters and articles in the trade magazine "The Miller" in the 1880's. Without the special sail it was still an important mill, however, and was one of the finest of its type in East Anglia. 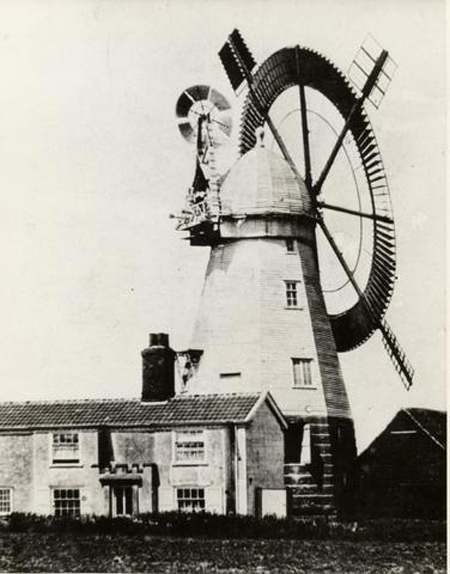 It stood at the top of the hill leading out of the village to Sudbury, on what was probably an old windmill site. It is indicated on Hodskinson's map of 1778-82 and the smock mill was built c.1788. It was virtually identical to Dalham mill, both being the work of one of the Ballingdon millwrights (probably Hurwood). When first built it had a low brick base, or possibly no more than a low plinth. When advertised for sale in 1802 it was described as a "capital bricked smock windmill". The (un-named) proprietor was retiring; the mill "was erected about 14 years ago, on the most substantial and improved modern principle; it has two pair of French stones, 4F.6I. diameter with flour mill, dressing machine, easing lighter..." This last reference is one of the earliest mentions of a governor in Suffolk.

In 1807 it was again for sale, the proprietor James Mayer having taken "an extensive water mill" elsewhere in the County. By this time a third pair of stones, of 4 feet diameter, had been added. In this respect it exactly matched Dalham mill. In 1820 it was offered to be let; "Mr. Boreham" was on the premises. In 1830 John Gosling was at the mill. A correspondent to "The Miller" in 1882 wrote that it was raised "about 30 years ago" but this is in error. An account of an accident in 1836 refers to the stage "about 20 feet" above the ground. Thomas Foster, an employee of Mr. Gosling, was blown off to his death during a gale. The mill was actually raised by 16 feet, gaining a two storey base of stepped brickwork, as seen on other similar mills in the area. It ended up nearly 60 feet high and was 28 feet diameter at the base.

The tithe map names Mrs. Edith Gosling as owner and occupier and she remained until at least 1853. Amos Tiffen was in occupation by 1858 and in 1860 it was offered for sale with him as tenant, described as "the High Mill". It is likely that Tiffen was able to buy the mill, still equipped with common sails (and probably hand-winded) at this time. In the following year he employed the millwright Alfred Clubb, of Colchester, to modernise the mill, and it is then that the annular sail was fitted. It was based on that at Haverhill, but differed in several respects, so as not to infringe Chopping's patent. It was about 50 feet diameter, with a double set of radial vanes, and was almost uncontrollable in gusty winds! It was later modified, losing the inner row of vanes and gaining four double shuttered patent sails which projected beyond the outer rim. These steadied it, and gave a lot of extra power. It would have worked much better in strong winds than the Haverhill mill, which had a similar sail without the extensions.

The mill was taken over by Stephen Scarfe in the 1870's and he also worked the water mill in the village. Scarfe thought the annular sail superior to conventional ones but a terrific gale on 18th January 1881 took much of the sail off, breaking the iron cross and effectively preventing its repair. The journeyman miller at the time, Ernest Gowing, (who later had one of the Sweffling post mills) recalled that at the time the sail was destroyed the mill was running all three sets of stones! A new windshaft and four "normal" patent sails were fitted by Collins, of Melton and in this form it worked on until the 1900's. There is some confusion as to when it was demolished; one source says 1901, yet it is shown as being in use on the 1902 OS map and Scarfe is still listed as using wind power in the 1908 directory. A postcard exists of the mill with the vanes out of the sails, and it is said that it was stopped for want of Â£10 worth of repairs. It was probably demolished between 1910-15. The mill house survived until the early 1970's when two new houses were built on the site.

Boxford mill's internal arrangement is well documented, thanks to its similarity to Dalham mill and the first-hand testimony of Mr. Gowing. The stones were all mounted on a "hurst" on the lowest floor of the smock (originally at ground level) and the spur wheel, of timber clasp arm type, ran underneath, completely enclosed in boarding. At Dalham, the solid wooden stone nuts are disengaged by means of "slip cogs" and the governors are perched high above the stones, driven off extended damsel spindles. It is highly likely that Boxford mill was the same. Two dressing machines were hung below the ceiling, driven by belt from a layshaft driven off the crown wheel on the bin floor. From the way the dressing machines were described above, it is likely that they were a bolter and a wire machine. Why one of each should have been needed I can't say, but this duplication was not uncommon in larger mills, and can still be seen at Stansfield. Perhaps one was used to make the white flour and the other to grade the tailings.

At Dalham the upright shaft is in two parts, with a universal joint on the bin floor. The original oak windshaft at Boxford is said to have been three feet across at the head and probably had a six spoke compass arm brakewheel. Dalham mill's was of this type and was later converted to clasp arms. The Dalham wallower had been replaced with one of iron but the Boxford type is not recorded.

Externally, the cap was a large "beehive" type with a prominent finial. There was a short pentroofed extension to the rear, which would have originally shielded the hand winding gear. At Dalham this drove by way of a spur pinion on the inside of the wooden curb and Boxford probably had similar. The six-bladed fantail had been tacked on to the rear of the cap with vertical posts with double cross bracing. The posts were restrained by iron rods to the top of the cap. Striking was by rocking lever. In its final form the mill had no reefing stage but this would have been level with the top of the brick base. The cap had a simple iron-railed gallery and, up to 1881, the sail could be serviced from a lethal looking platform tacked onto the mill above a window. A small staging was fixed below the rear of the cap to allow servicing of the striking and winding gear. The annular sail had 120 vanes 5 feet long and the extensions were 9 feet by 6 feet. As it finished up the sails were double shuttered patents of 10 bays, running anti-clockwise. 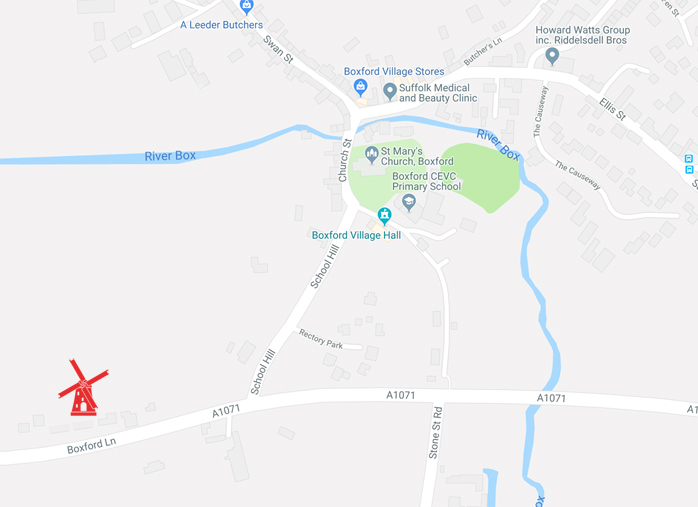