WHAT DO YOU KNOW ABOUT FLOODING IN BOXFORD?

Flooding is an issue which we want your views about because it should be taken into account when future planning decisions are made.

THE HISTORY OF FLOODING IN BOXFORD

Damaging floods have occurred in the centre of the village since it was first settled. The site of the early village and bridge, where the valley narrows considerably and there is no floodplain, was chosen to limit flood damage. However, there are historical and recent records of the flooding affecting the Post Office, Broad Street and the White Hart when the River Box has overflowed its banks. Equally damaging have been the occasions when the brook descending from Horner's Green and Groton and its tributary descending from the Brook Hall Road area have overflowed. Although these streams have relatively small catchment areas, they can produce a very fast, high run-off during a short burst of intense rainfall. Climate change is already making such periods of intense rainfall heavier and more frequent.

In 1845 a "barrel" drain was placed under the length of Swan Street, mainly to take storm water down to the River Box and stop floods coming off the fields and down the hill from Groton. Despite this, the worst flood recorded was on 18th September 1888 when water rushed through the village causing considerable damage to houses and the White Hart. It is not clear whether this was the result of the River Box overflowing or all three possible sources. The river itself was by this time confined in normal flow to its present quite deep channel through the village, but it would seem that this has not always been sufficient to prevent bank overflow.

In May 1924, after a big storm, water rushed down Butcher's Lane one and a half feet deep. In 1935 a flood destroyed the millpond and retaining sluice gates and threatened the village. In 1939 the village centre was flooded again. After a very snowy winter, the big thaw in March 1947 flooded the White Hart and Post Office Stores when the River Box overflowed. In 1978 and again in 1988 a period of heavy rain led to flooding down Ash Street and Butchers Lane, threatening houses, but not entering them. More recently "flash floods" through the village seem to be the result of short but intense rainfall in a major thunderstorm bringing more water down from Groton than the brooks and drains and Swan Street can cope with. This happened in 1992 when water, soil and stones ended up in Broad Street and the Post Office Stores. 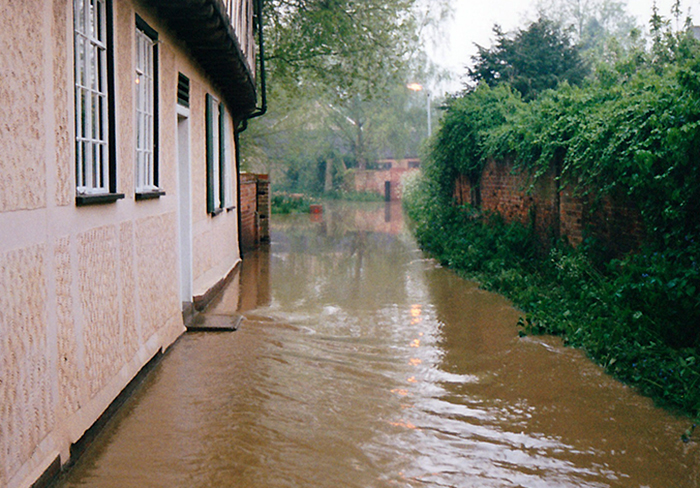 Flooding in Butchers Lane, May 2000

The major flash flood on the 13th May 2000, described locally as a "cloudburst", brought water lapping at the steps of houses in Ash Street beside the bridge and entered three of them. The water arrived in the village at 7.00 pm following an intense storm over Groton 90 minutes earlier. It was reported that the water in the brook rose five feet at one place in half an hour. In Ash Street the water was six inches deep and in Butcher's Lane it flowed like a river. It escaped into Broad Street and flooded a 200 yard length of the street, lapping at the steps of The Fleece and finally escaping into the River Box. The White Hart was flooded and needed new carpets throughout. The flow almost one foot deep down Ash Street escaped partly through Riddellsdell's garage, over Ellis Street, down The Causeway and through gardens into the river. Fire crews were called to help with pumping out from Sudbury, Nayland and Hadleigh. (Our thanks to Brian Fearis for new information received recently, some of which is included here.)

Since this flood Babergh District Council and the Environment Agency have taken steps to increase the watercourses' capacity. There have been improvements to the culverts, channels and bridges at Fen Street, Ash Street and Ellis Street and the Environment Agency has improved the River Box channel through to Stone Street hamlet. The building of the Station Field estate in 2016 required an underground attenuation system to slow drainage to the Holbrook Barn stream, since that has also threatened Fen Street in recent years. Since all these various works were completed, there has been no bank overflow anywhere in the village, even after very intense rainfall. The Weaver's Green/Sand Hill outline application for another 64 houses plans to replace that attenuation scheme with a much larger one. It remains to be seen whether this will be adequate to maintain the recent good record as regards flooding in the village.

With climate change already bringing much more frequent, intense rainfall, this and the previous channel works may not be sufficient in the longer term to prevent a repeat of flooding in the village. The areas of past flooding should be taken into account when considering land suitable for further housing development in the Neighbourhood Plan. For this the Environment Agency surface water and river flood risk map is an invaluable source of data for the whole parish. (https://flood-warning-information.service.gov.uk/long-term-flood-risk) 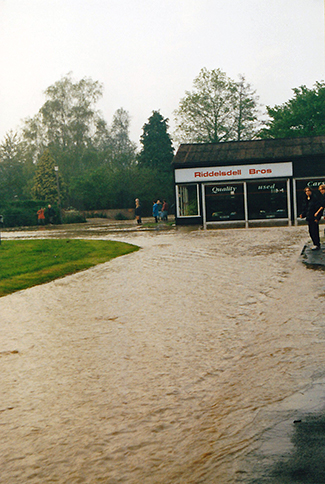 Flooding in The Causeway, May 2000 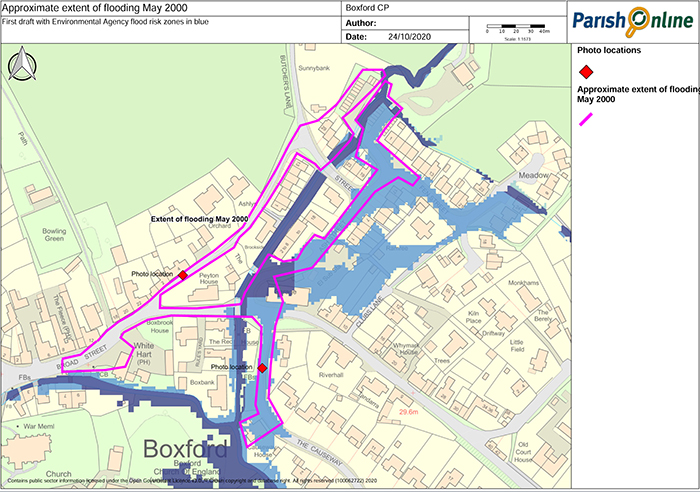 Our map shows the latest Environment Agency flood risk in two shades of blue and the approximate area of the May 2000 flood ringed in red. We now need your help in sharing any information you may have so that the Neighbourhood Plan can provide evidence for its conclusions. We ask that you spend a few minutes reflecting on the three questions below.

1. Do you have any information you can give us about flooding around your home or elsewhere in the village?
2. Can you help us to be more exact with the extent of the flood in 2000? Which houses and gardens were flooded?
3. What else could be done to limit the risk of flooding in future?

Please respond by sending our Steering Group an email: boxfordnp@gmail.com