Rose Ann Cousins, pleaded guilty to stealing a pearl necklace and other articles, the property of the Rev. J. Byng, her master, at Boxford. - Mr Bulwer said he was instructed to watch the case on behalf of the accused, who was the daughter of most respectable parents; she had gone out to service at her own request, and up to this time had borne a most excellent character, but had probably been tempted by these gew gaws to commit this offence. -He called witnesses who spoke to her character from childhood. -The Court sentenced her to three month's hard labour, the first and last week in solitude.

Sarah Balaam, an elderly woman of respectable appearance, was indicted for stealing six knives, six forks, and a cloth, the property of William Gardner, at Boxford, on the 7th May.
Mr. Johnson prosecuted; prisoner was defended by Mr. Bulwer.
Margaret Gardner deposed: I live with my father and mother at Boxford; we had some knives and forks wrapped up in a cloth, which I saw hanging on a nail by the fire-place about a quarter before eleven on the 7th of May; I then went to Mrs. Grigg's, who lives in a house commanding a view of my father's house, so that a person can see anyone who goes into my father's house; I went to inquire the time and was only there two or three minutes, but while I was there I saw Mrs. Balaam go to our door, and when I went home I met her coming away from the house; I asked what she wanted, and she said she wanted father; I told her he was not home; I then went into the house and stayed till about 12 o'clock; nobody came to the house during the interval; when I sat down to dinner I missed the knives and forks from the nail; I went to Mrs. Balaam and asked her what she had done with the knives and forks she took from the fire-place; she said she had not seen any; nobody could have gone to the house while I was absent at Mrs. Grigg's without my seeing them. 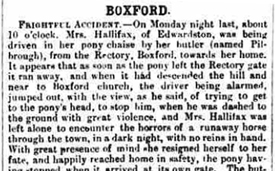