Cruelty to a Donkey - James Claxton, of Boxford, labourer, was charged by Supt. Schofield with cruelly ill-treating an ass, at Boxford, on the 11th January.
The case was proved by policeman Simons, who saw the defendant beating the donkey with a stick until it fell down, after which he kicked it while it was on the ground.
Defendant denied having a stick and called his brother as a witness, but his evidence only made the case worse.
Fined 8s., costs 8s. 6d., or 14 days'. Allowed 14 days to pay.

Unjust Scales - Robert Boreal, shopkeeper and flour seller, of Boxford, was charged by Supt. Schofield with having in his shop one flour scale two ounces and a half against the purchaser.
Fined 20s., costs 6s, 6d. Paid.

Breach of the Peace - Chenery Smith, of Edwardstone, labourer, and John Watson, of Boxford, carpenter, were charged by Supt. Schofield with committing a breach of the peace by fighting in Boxford Street, on Sunday morning, the 23rd January.
Bound over to keep the peace for three months', and ordered to pay 7s. 3d. each costs. 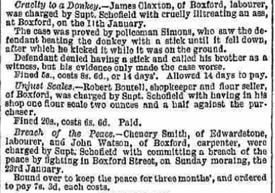