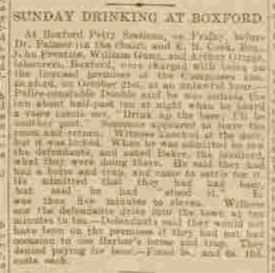 The sequel to the Boxford public-house affray was heard at Boxford Police Court on Tuesday, when, before Col. W. H. L. Corry (in the chair), and E. B. Cook, Esq., John Death, an ex-marine and militiaman, was charged by Eliza Phillips, married woman, Baker's Arms, Boxford, with aggravated assault, and by her father, James William Andrews, landlord of the Baker's Arms, with common assault. —Mr. L. G. Fisher (of Messrs. Fisher and Steed, Sudbury and Melford), defended. —Both cases were taken together. 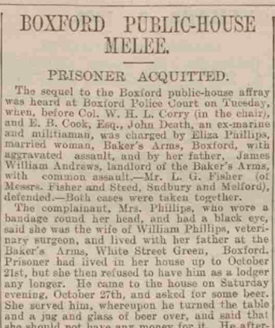 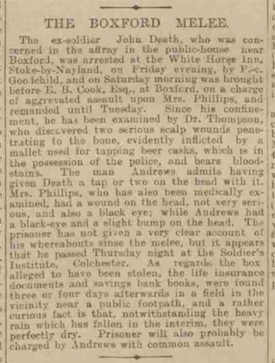 Boxford Suffolk
JOHN KING
Is instructed by Mr. Jonathan Beeston to SELL by AUCTION. in Butcher's Lane, only a. few yards distant from Boxford Street, on Friday March 30th. 1900, the materials arising from the pulling down of a modern built brick-and-slated Malt house and premises, comprising
40,000 Red-and-White BRICKS
3,000 Good Slates.
A large quantity of sound battens, rafters, and floor boards, windows and shutters, iron columns, bearers, and kiln bars.; also numerous other effects.
Sale to commence at 12 o'clock punctually.
Catalogues may be had of the Auctioneers. Hadleigh. 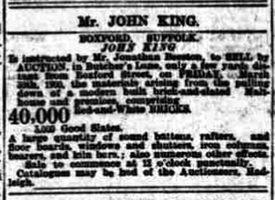