An Alarm With Music

Amongst the New Year greetings was one from an "old" friend, Tornado Smith, who is, as usual, hitting the headlines with novel notions. His latest idea is to install music boxes as bugler alarms in his new house!
As most of my readers know, Mr. G. W. Smith - to give him his off stage title - is a native of Groton, near Sudbury.
He once set up his 'Wall of Death' on Market Hill, and I believe Mr. Leslie Alston had pluck enough to be whirled round on the pillion of the motor-cycle.
But 'The Loop of Death,' featured a short time ago in the "Free Press," is his latest invention on which he thrills visitors to Southend-on-Sea. 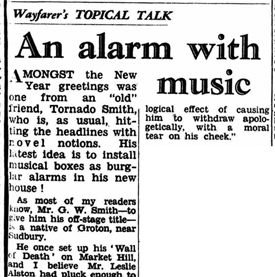