Mr. Rule finds…
THEY NO LONGER WINK AT RULES

Because he did not know the authorities had stopped winking, Newton S. Rule, of Boxford, who operates a 'bus service between the village and Bury St. Edmunds, was fined £1 at Bury Magistrates' Court yesterday.
He was before the Court because, being the holder of a public service vehicle licence, it was alleged he had permitted a stage carriage to be used without it carrying a conductor.
Mr. T. A. Symes, prosecuting, said that owing to the shortage of labour and of the necessary trimmings of the war the authorities had by tacit allowance winked at a good deal of the non-observance of this regulation by operators. Now five years after the end of the war the Ministry of Transport and the Traffic Commissioners felt that the regulations should be more strictly enforced. 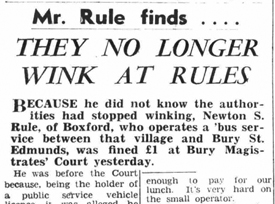