A 54-year-old Boxford farm foreman was killed on Saturday when a tractor he was driving crashed from a wooden bridge, broke his neck and pinned him beneath three feet of water.
He was Mr. Archie Clarke, "Cherryground Cottage." Wash Lane, Boxford and the accident was described at an inquest at Boxford Police Station on Saturday afternoon.
BRIDGE BROKE
It was stated that one of the bearers of the bridge broke as the tractor was passing over it, and the vehicle toppled over the side into the river below.
The Coroner, Mr. Thos. Wilson, of Bury St Edmunds, returned a verdict of "Misadventure". 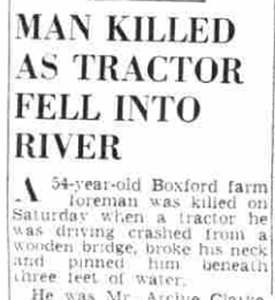