How Changed is Our Village

The graveyard of Boxford church is well planted with mute inglorious Miltons, their dust restored to this corner of England that bore them. They were not innovators; neither was it in them to challenge the order of things. They were born to do as they were told, each knowing his place; they were reared to duty. When they were called to arms, they went. They shed their youth and their blood, some of them, in foreign fields; and if at the going down of the sun and in the morning, we remember them, they would expect no more. Boxford never stole the limelight.

John Winthrop, from the adjoining parish of Groton, convinced that "evil times are come when the Church must fly to the wilderness" set sail in 1630 to found Boston and become first governor of Massachusetts. At nearby Polstead in 1828 wicked Squire William Corder murdered Maria Marten in the Red Barn; a foul deed which addicts of village hall melodramatics will never let us forget. Boxford's chief claim to fame, or infamy, is that Corder faced the magistrates in a panelled room at The Fleece Hotel before being hanged in front of 10,000 people at Bury St. Edmunds. 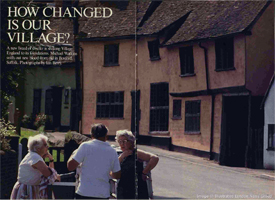