In abeyance during the war years, Boxford Horticultural Show was successfully revived in the Rectory Park on Saturday. With the exception of one section, open to residents within an 8-mile radius, it was confined to the parishes of Boxford, Edwardstone and Groton. There were nearly 800 entries, and having regard to the vagaries of the season, the quality of the exhibits was excellent. 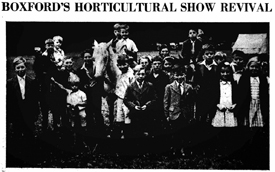 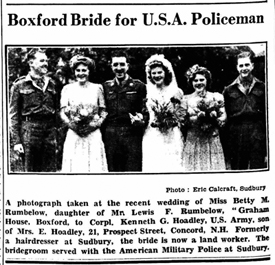 He's At It Again!

Guess who dropped in the other day? None other than our “old” friend Tornado Smith. And he’s doing his tornado stuff again. Mr. G. W. Smith, born at Boxford, has had varied experiences during the war. He wanted to Join the R.A.F. but that was a closed door to him. He had a spell with the Merchant Navy and knew what it was to be in convoy sail with U-boats prowling. He was to be a Commando — Tornado always looks for excitement and adventure. Then he found himself in the N.F.S. but didn’t find a lot of excitement while he served with those who waited for calls. Now he’s "out” again and what must he do but put up his famous Wall of Death at the Kursaal, Southend, where he careers round and round on his motor-cycle, with trick riding thrown in while spectators gasp. In April, Tornado rode his “ordinary,” with the Penny-Farthing Club from Big Ben to Blackheath, and the Pathe Gazette made a film which perhaps we shall see. Now Tornado is developing the idea that came to him during the war for another public thriller. I gather that it will be a daring loop-the-loop by motor-cycle or car. Some of the oak which will be used for the structure was grown in this district. Happy landings! 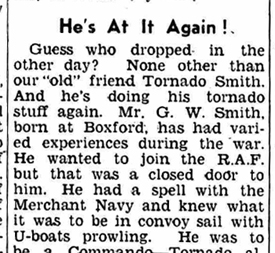 "Tornado" Smith, the Boxford born rider of the “Wall of Death" at Southend and Sudbury in pre-war days, who has just married again, has scheme afoot for a new form of thrill. What it is to be this time I cannot say for certainty, but I shouldn’t be surprised if he is going to loop the loop or something like that. He purchased a number trees years ago and these are now to be hauled for him and cut into planks by Messrs. Wheeler, of Sudbury. At the moment the biggest tree lies where Mrs. Smith (then Nurse. Ware) felled it, at Leavenheath. The other trees were felled at Boxford. Well, good luck to “Tornado" in his new ventures. 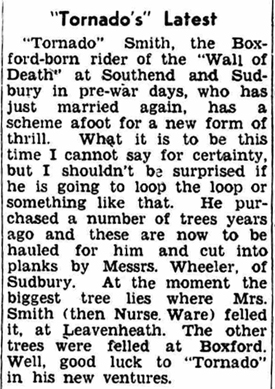 News has been received by Mrs. E. Speller of Colchester, that her son, Driver Ronald J Tricker, of the R.A.S.C. Central Mediterranean Forces, has been killed in action in Greece. Driver Tricker, who was 23 years of age was grandson of the late Mr. Walter Tricker of Brook Hall, Boxford, and spent his boyhood in that village. Prior to enlistment at 19 he was in employment at Cant's Rose Gardens, Colchester.
Attached to an Armoured Brigade, he saw active service in the Middle East, served in Sicily and later in Italy. At the time of his death on December 13th last he was defending a Strong Point in the neighbourhood of Athens and in expressing their sympathy with the bereaved mother, both the Officer Commanding at the unit and his Company Commander referred in glowing terms to his courage and devotion to duty. Much sympathy will be extended to his mother and other near relatives from all his friends in Boxford. 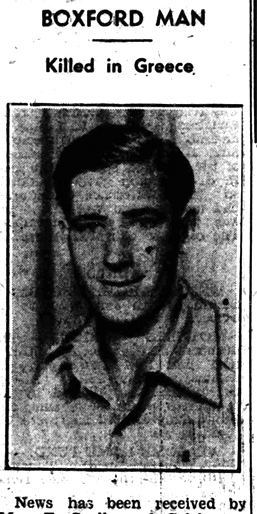 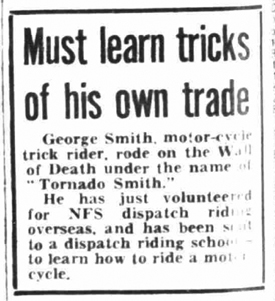 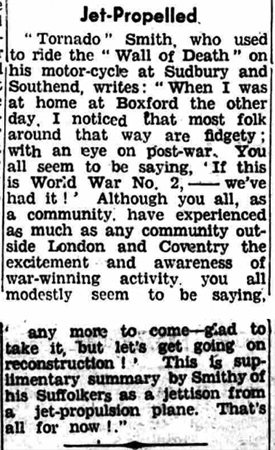 Mr. and Mrs. H Tricker, of 6, Bonsey Terrace, Boxford, have just received news of one of their two sons who were serving in the 5th Suffolk Regiment and have been missing since the fall of Singapore. A Japanese censored postcard reached them on Saturday week from Vernon the youngest of five serving brothers, and read: "Am safe and well. I am a prisoner of war and in the best of health. No need to worry." No news has yet come from the older brother, Maurice. Harry, the eldest son, is at present on service in India, while Frank and Lawrence are serving in this country. 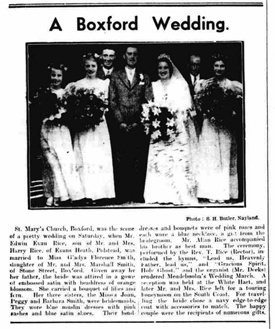 We Take our hat off to -

"Tornado" Smith and his wife, better known as Miss Marjorie Dare, of the Kursaal "Wall of Death," Southend, are busy on an unusual occupation. They are constructing a 12-ton Bermudan cutter, to be called "Home Made," in which they propose to sail round the world, in spite of the fact that Mr. C. W. Smith has had no previous experience in shipbuilding. For this work, they are using a barn. 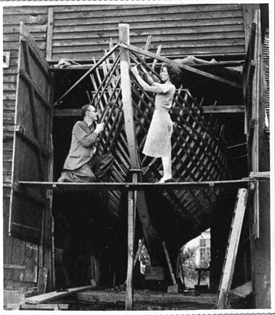 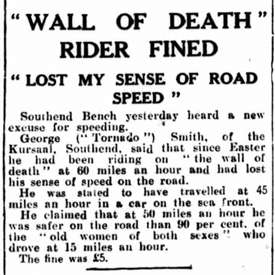 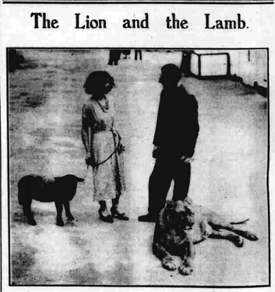 At the Boxford Police Station on Friday, before Sir William Brunette, Albert Baker and Arthur Sandford, labourers, of Boxford, were fined £5 each for unlawfully entering land at Stoke-by-Nayland, in the occupation of Wm. Pickering, with a gun, for the purpose of taking game contrary to the Night Poaching Act. They were charged by Henry Wm. Dudley, gamekeeper, Stoke-by-Nayland.

The Court Room had an unusual appearance, resembling a game dealer's shop, for 15 fine pheasants graced the wall. Both defendants pleaded guilty.

Mr. J. N. B. Ashton (Bankes Ashton and Co., Bury St. Edmunds) said that on the night of November 13th, the Keepers were watching the land occupied by Mr. Pickering, and over which Lord Davies had the shooting. They heard several shots. Very soon the defendants came to where they were concealed. There was some scuttling. Baker had four pheasants in his pockets, and Sandford dropped a bag containing 11 pheasants. Baker swung his gun round and round to evade capture. No one was hurt, and both defendants gave in and were conveyed to Boxford Police Station.

The defendant Sandford said that some of the pheasants were shot on his father's land.

The gun produced was provided with an up-to-date silencer.

After a short retirement the Chairman told defendants that they had narrowly escaped being sent to prison. The offence to which they had pleaded guilty was a business which had got to be stopped. Each was fined £5; in default one month's imprisonment. In addition, the defendants are to be bound over in £10 not to again so offend for a period of 12 months.

The above photograph is of Boxford's best little lady, Mary Gant, and Boxford's best little gentleman, Ronald Stanley. They are scholars at the Council School and were chosen by the ballot of their fellows for this distinction. There was a special prize for each and Mary is seen wearing hers, which was a wristlet watch. 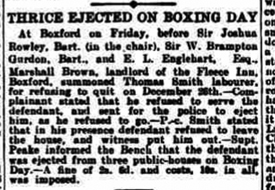