THE BELLS OF ST. MARY'S

Boxford and Edwardstone church do not have enough people to ring the bells for services and celebrations.
They are looking for people who would like to learn the skill of ringing church bells. Ringers can be any age from eight to eighty and it is not a matter of strength to be a good ringer.
Anyone interested in learning should contact Richard Gates on 01787 210432 who will be able to tell you more about this traditional practice.


The bells in the belfry of St Mary's Church in Boxford are heard by many, but very few have actually seen them firsthand or know anything about their fascinating history. Richard Gates tells us about what goes into the sound of the 9 bells of Boxford.

The clock bell, in D, weighs 4cwts 0qrs and 14b.
It used to be the 2nd in the ring of 8.
It was made by William Chamberlain of London around 1440.
After refitting at Taylors it was hung back in the ancient timber frame for swing chiming.
The clock used to strike on the 5th bell but now the old 2nd is heard as the clock strikes.
The bell is called Nicholas, it's inscription saying:
'Sancte Necolae Ora Pro Nobis'
meaning 'Saint Nicholas Pray For Us'

The old treble bell was melted down and recast at John Taylor & Co, Bell foundry, with many of us watching.
They made a new bell in E♭ (E flat), weighing 5cwts 3qrs and 2lbs.
Taylors inscribed their own mark on it and reproduced the leaves and fruit engraving that was on the old bell, together with the old inscription:
'Thomas Gardiner Sudbury me fecit 1714'.

The new 2nd bell, in D, replaces the old 2nd which is now the clock bell.
We watched it being cast. It weighs 6cwts 3qrs and 20lbs.
It is inscribed:
'To the glory of God'
It also bears Taylors' mark and the names of the Rector at time: Eric Hamlyn and the two Churchwardens, Morriss Clover and Christopher Kingsbury.

The 3rd bell, in C, weighing 7cwts 2qrs and 4lbs, was made in 1754 by Thomas Gardiner of Sudbury who decorated it with two different kinds of crosses, the Bracker's cross and the Potter's cross. 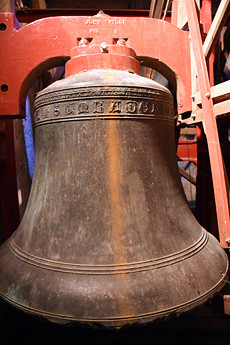 The 5th bell, in A♭ (A flat), weighs 10cwts 3qr and 6lbs, was made by Thomas Osborne of Downham Market in 1790. Besides the maker's mark it bears the names of two 18th century Churchwardens, Isaac Strutt and Hugh Green.

The 6th bell is special, being the oldest bell in the ring. It is in G, weighing 13cwts 1qr and 20ibs and was made by Thomas Potter in Norwich around 1410!
It is beautifully inscribed with a patterned border.
It has the name Katherine and bears the legend:
'Sum Katerina Semper Virgo Deo Digna'
meaning: 'I am Katherine ever a virgin worthy of God.

The 7th bell, in F, weighing 19cwts 2qrs and 24lbs, is also very ancient, having been made around 1470 by Kebyll of London.
It has a name Gabriel, and the inscription reads:
'Intonat C Celis Vox Campane Gabirelis'
meaning (I think) 'There sounded from Heaven the ringing voice of Gabriel'. 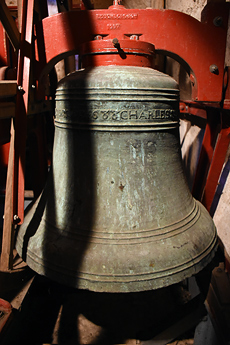 The tenor was reputed to weigh 24cwts but when weighed at the bellfoundry in 1996 was found to weigh a mere 21cwts 2qrs and 10lbs.
This makes it heavier than the Lavenham tenor but lighter than that of Stoke-by-Nayland.

It's diameter is more than 4 feet.
It was made by John Thornton of Sudbury in 1718.
This strikes the keynote of E♭ (E flat), but as the organist Duncan Archard pointed out, it is in fact very slightly flatter than E♭.
The five lightest bells have been tuned to be compatible with the three heavy ones, making a unique and pleasing octave. When it came down from the tower this fine tenor bell was found to be cracked and had to be welded by Soundweld near Cambridge before being restored by Taylors.
The tenor has a name; it is called Trinity and bears the inscription:
'Haec Campana Beatae Trinitati Dacra'
meaning (I think) 'This bell is holy to the Blessed Trinity'.

The bells were re-tuned, restored and recast as appropriate by John Taylor Bellfounders in 1996.
Transport was undertaken by the 3rd Army Air Corps.
The tower was repaired and restored by FA Valiant and Son Ltd in 1997.
The bells were then rehung in a new steel frame lower down in the tower in June 1997.
At the same time, at the expense of Boxford Parish Council, the church clock was fitted with an electric winding mechanism by Haward Horological of Barking Tye near Ipswich.
A service of dedication and thanksgiving was held at 6:30pm on Sunday 5th October 1997 with the Bishop of Dunwich presiding.
Substantial grants were made by several organisations and the enthusiasm and generosity of the people of Boxford was outstanding.

For much of this history I am indebted to Ranald Clouston's reports of 1966 and 1997.
An ancient pealboard in the ringing chamber shows a peal of Plain Bob Major was rung in 1814.
An old Norwich Diocesan Association report shows a peal of Kent Treble Bob Major was rung in 1896.
On 1st January 2000 the Suffolk Guild rang a peal of Yorkshire Surprise Major.
More peals have followed on New Year's day each year.