Peter Alexander Haining (2 April 1940 - 19 November 2007) was a British journalist, author and anthologist who lived and worked in Boxford.

With his cheerful disposition, Peter Haining was a popular man in Boxford. A long-term Parish Councillor and Boxford enthusiast, he was instrumental in the village obtaining its village sign in 1996. He also wrote the authoritative history about Tornado Smith - "British Pioneer of the Wall of Death, Tornado Smith" and donated all proceeds from the sale of the publication to the Boxford Community Council.
He is well remembered and fondly missed. 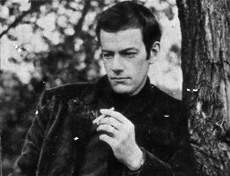 Obituary from The Telegraph:
Peter was a prolific writer and editor of more than 130 anthologies on subjects ranging from crime to horror, witchcraft and fantasy. In all, Peter produced more than 200 books, including what one critic acclaimed as "some of the best anthologies of fantasy and horror of our time".

Peter was one of Britain's leading authorities on horror, and particularly on early Gothic and the classic English ghost story. In the 1970s, when 19th-century Gothic fiction was hard to find, Peter's compilations were often the only available source of such material for the general reader.

Hostile to the then ubiquitous Pan paperback series and its imitators, Peter favoured the subtle and the classic over the shocking and the graphic. 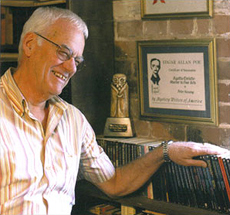 He also sought to broaden the repertoire of the anthology beyond the tales that turned up repeatedly, uncovering many hitherto obscure stories in the several thousand volumes that comprised his library in his 15th Century home, Peyton House, Boxford, which is reputed to be haunted.

His crime output was no less compendious; he would usually produce two or three collections a year, with titles redolent of the golden age of detective fiction: Great Tales of Crime and Detection (1993), Tales from the Rogues' Gallery (1994), Murder at the Races (1995) and London After Midnight (1995) being a typical selection.

As well as his collections of other people's writing, Peter wrote history and biographies of fictional historical characters such as Sweeney Todd and Spring-Heeled Jack. He wrote an early novel under his own name and produced several crime anthologies using the pseudonyms Ric Alexander and Richard Peyton.

Peter also published several reference books about the television series Doctor Who, notably Doctor Who: a Celebration; Two Decades in Time and Space (1983) and Doctor Who: the Key To Time, a Year-by-Year Record (1984).
Another area of Peter's expertise was the Sherlock Holmes oeuvre, of which he had an encyclopaedic knowledge; he edited A Sherlock Holmes Compendium (1980) and several further books on the detective.
Other film and television tie-ins featuring characters from literature included books on Maigret, Poirot and James Bond. Eccentrically given to outrageous shirts and silly hats, Peter habitually clipped and tore items out of newspapers and magazines and filed them away, a magpie habit that yielded ideas for many of his books. "I've always moved on from one thing to the next," he once explained, "and the ideas just seem to keep on flowing.
I'm a writer for hire - that's what I've been doing for 30 years and that's what I enjoy doing."

His interest in witchcraft was stirred as a young newspaper reporter on the West Essex Gazette at Loughton when he covered an outbreak of church desecration. Later he worked in Fleet Street on National Newsagent magazine as features editor before joining New English Library.

He became editorial director, but resigned in the early 1970s to become a full-time writer. Finding the British horror genre wanting, he began producing anthologies of his own, introducing each piece with details about the author, in the belief that it gave the stories an extra richness.
While working on his horror collections, Peter was told by a book dealer about four boxes of cuttings and scrapbooks on Sherlock Holmes, the lifetime collection of a solicitor who had started it in about 1910. This became The Sherlock Holmes Scrapbook (1975), a pull-together of articles, clippings and illustrations supporting the myth of Conan Doyle's character. The book prompted interest from Granada Television, which was making a series starring Jeremy Brett as Holmes, and Peter was invited to produce a book on the making of it, The Television Sherlock Holmes (1991). In the historical field he edited The Penny Dreadful, or Strange Horrid and Sensational Tales (1975), and wrote The Legend and Bizarre Crimes of Spring-Heeled Jack (1978).
In The Man Who Was Frankenstein (1979), Peter suggested that Mary Shelley's inspiration might have been Andrew Crosse, a Somerset gentleman and amateur scientist who terrified his neighbours by using lightning as a source of power for electrical experiments.

Peter assembled 28 pieces on cricket by, among others, Trollope, Travers, Conan Doyle and John Arlott in LBW - Laughter Before Wicket (1986).

He followed this with The Scarecrow (1988), inspired by a letter to a newspaper asking whether the British scarecrow was extinct; Peter's survey ranged from its historical origins to Worzel Gummidge and Michael Foot.
Inspired by his father, who had served in the RAF, Peter's most recent project was a series of Second World War stories based on research and interviews: The Jail That Went To Sea (2003), The Mystery of Rommel's Gold, Where the Eagle Landed (both 2004), The Chianti Raiders (2005) and The Banzai Hunters (2007). In 1991 his Agatha Christie: Murder in Four Acts was nominated for an Edgar Allan Poe award by the Murder Writers of America.