AN AUTUMN WALK IN PRIMROSE WOOD

Primrose Wood was planted in December 1998 by the people of Boxford who helped to fund it, together with the Woodland Trust. The flower rich wet meadow is designated a County Wildlife Site. The management of the area is carried out by the Woodland Trust and village volunteers keep the paths cut. Other volunteers record the wildlife and its changes over time. There is plenty to see in autumn as it is a large area which is now heavily wooded.

This article will help you to enjoy the wood by pointing out what you might see. You will be able to recognise some of the 12 species of tree using the identifying features.

The wood is accessed from Daking Avenue along a footpath that runs along two hedgerows, over the bridge and along a further fenced footpath. At the wood entrance the paths branch left up the hill or straight on along the valley bottom. (You need boots).

Come and enjoy this lovely place.

On your way along the paths towards Primrose Wood, at the start of autumn, you can see a colony of Bloody-nosed beetles. These creatures make their home in the Goosegrass or Cleavers that grow up the fences edging the path and are 2cms long. You can find them on the left of the path either side of the double gates you pass through just before you reach the wood. They get their name from the fact that when attacked they produced a blood coloured liquid from their mouth or joints. It is bitter tasting and stops other creatures from eating the beetle. 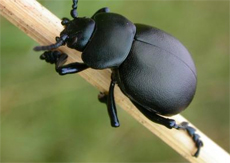 When you enter the wood take the path up to the left where the autumn colours are usually the best. At this time of year we should expect to see the leaves of trees changing to bright autumn colours before most trees eventually lose their leaves. Last year the autumn colours were stunning but the year before most leaves went from green to brown with hardly a sign of the usual lovely yellows, reds and oranges. We hope you will be lucky this year. 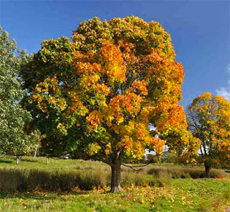 Leaves are nature's food factories and make glucose which plants use for energy and as a building block for growing. The trees "know" from the shortening days of autumn that they should begin to get ready for winter when there is not enough light to make food. They begin to shut down and eventually discard their food factories - the leaves. Before the leaves fall off they change colour; greens fade and we see yellows and oranges which were there but covered up by the greens. In some cases such as the Field Maple glucose is trapped in the leaves and turns red. In autumn you may see Spangle galls of the Gall wasp on the underside of Oak leaves. 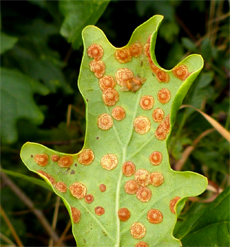 There are plenty of fruits in the form of berries on lots of the bushes. These are an important food for birds during the autumn and winter. Some are poisonous and others have been used for hundreds of years by people to supplement their diet. Along this path there are clumps of Dog Rose bushes with their orange-red hips. During World War Two the hips were collected to make syrup which is rich in vitamin C. Some people still pick the rose hip fruits for wine making. They can be made into jam but most people would not bother because you have to take out all the little hairs on the inside before you can cook them. Years ago children used the hairs as itching powder to annoy their friends. The Hawthorn tree has similar fruit but they are darker red, smaller and rounder in shape. The berries hang in bunches and can also be turned into jam. In China they are turned into sweet hawthorn flakes which are flat and round. You can buy them in England in the Chinese grocers. 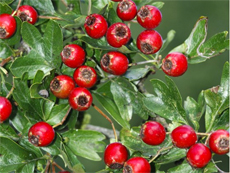 Along here there will also be Blackberries for making jams and pies. The Elder tree berries are also black and can be turned into jam or wine. Towards the end of the top path, on the left, there are two kinds of red berries in one group of bushes. They are both poisonous to humans and you should not touch them. One kind is the fruit of the Honeysuckle and the others are those of the Spindle tree. We have two spindle trees in Primrose Wood and this is a very young one. It is the first year it has fruited. The other is down by the river and very old. The 4-lobed fruits turn deep-pink in autumn and later open to expose four bright orange seeds. The birds like these fruits. The leaves turn dark red in autumn. The white or pale-yellow wood was formerly used for making spindles, knitting needles and skewers. 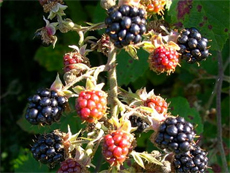 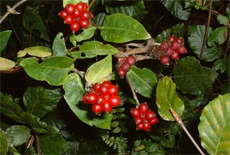 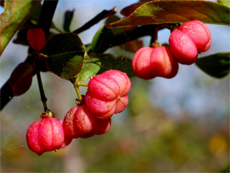 Along this path there may be fungi and during October there is often the large Parasol toadstool which the snails enjoy. Do not touch the fungi as some are poisonous. They are best left standing for the snails, slugs and insects to enjoy. You may have also noticed the seeds of the Ash which grow in bunches and earn themselves the name of Ash keys. The maple also has bunches of seeds with wings that helicopter the seed down to find a home on the ground some distance from the parent tree. 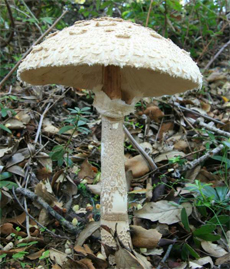 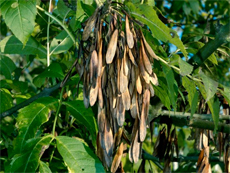 As you turn right to head off down towards the board walk you will see to the right of the wide tractor path the orange red fruits of the Guelder Rose. You pass over the style to your left, under the Oak tree on your right which celebrates our Boxford, USA links. It was grown from an acorn collected on the White House lawn in Washington, DC. 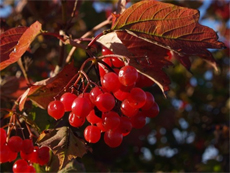 As you walk along the board walk you will see the Great Horsetails have grown tall and will begin to collapse when the frosts come. When you get to the end of the board walk you enter the meadow to your right. Here you will see the cone shaped flower heads of the tall Teasel. It develops seeds which when ripe are a favourite food of Goldfinches. Long ago it was used to cure warts and the rain water that collected between the stem and the leaves was used as an eye wash. These days people use them in winter flower displays. 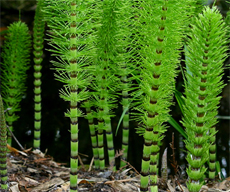 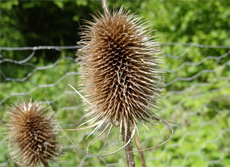 Early in autumn there will still be purple Water Mint making a beautiful display in the water meadow. Poking out above the Mint will be the Teasels and the last of the Angelica plants in flower. Angelica is an umbellifer with hundreds of little flowers in a domed head. There are usually ladybirds and other beetles enjoying the nectar until the flowers die off. The beautiful but rogue Harlequin ladybird is usually here. It is a foreign beetle that eats the native ladybirds. The yellow and black spotted longhorn beetle with its bright yellow and black stripes down its long body is also busy on the Angelica. The skeleton stalks of the earlier flowering umbellifer Hemlock towers over the grasses while there may be some sign of the tall Hogweed from the same family. 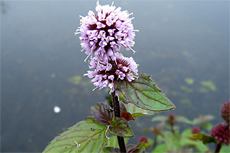 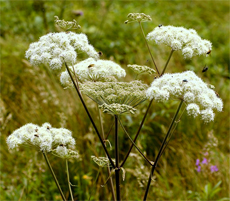 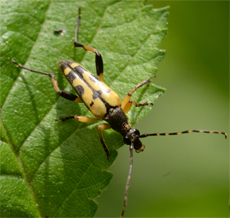 When you reach the picnic area marked by the seat on the left of the track you will see Willows by the water with Bean galls on their leaves containing a single Sawfly larvae. The galls look like a small kidney bean. If you look carefully at the thistles you may also find thistle galls but these have up to 12 larvae in them. 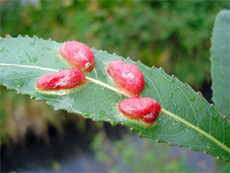