Fred (Tinker) Leeder and his wife Prim owned Goodlands farm in Boxford for many years. In his later life he did not leave the farm at all. Fred and Prim Leeder, over approximately 40 years, generously opened their farm and created a haven to several generations of children from Boxford. The children were able to help look after all the animals, swim in the pool he had made, ride his horses, and socialise together, off the streets.

Back at a time when Boxford had no playing field, Leeder's Farm provided many children an amazing array of activities. Originally, friends of Fred and Prim's 5 children were invited to the farm. Over the course of several decades, the list of invites extended to many other local children, until Fred passed away in 2002 in his late 80s. By which time some of the children of the original visitors, were also "going down the farm"!

The children who used to play on Leeder's farm had all of the meadows, now Primrose Wood, to explore, they could enjoy long walks and rides on the horses, and in the winter slide down the hills on a big wooden sledge!

There were also the many facilities of the farm itself, including 2 big barns, the milking shed, chicken runs, and pigsties. The children all enjoyed helping to feed the animals, collect the eggs, milk the cows and many of the older boys learned to drive tractors, and ride motorbikes there. Some of the older kids would help to get the harvest in. On top of all this, every morning, afternoon and evening, Fred would go round with a tray of hot chocolate and camp coffee! All provided with a smile and free of charge!

Fred was a quiet, gentle man, with a great sense of humour. Endlessly patient with all the children, but would keep them within safe bounds, as he went about his work, with all of the kids milling around him.

In 1997 the village decided they would like a 'wood on their doorstep' which the Woodland Trust were promoting. A committee was formed - 'Boxford Woodland 2000' and they started searching for a site. Fred offered to sell this part of his farm on two conditions. Firstly the wood must be named after Primrose his wife and Secondly that he could be buried there when he died. This was agreed. The village had to quickly raise part of the cost and the wood was planted in 1999 with some trees that were grown locally as well as trees supplied by The Woodland Trust. Many of the people who had played on Fred's farm as children and the pupils from Boxford School came to help plant the wood.

In 2002 Fred passed away. On 19th September 2002 Fred was brought to his final resting place in one of Fred's old fields next to the woods on a horse and wagon. Many of 'his children' and friends were there to say goodbye to him.

In 2014 the Primrose Wood Management Team discovered, buried in the Wild Area, Fred's old hay rake. It is the last thing of Fred's left on the farm. On the 28th of March 2015 Charlie Smith, Michael Norman and Vic Rice went to Primrose Wood, Boxford, with slabs and tools to install Fred's rake near his grave.

Now that the rake is in position the area is named 'Fred's Corner' or 'Tinker's Corner'. There is a path that leads directly there making it more accessible to people who want to come and remember Fred. 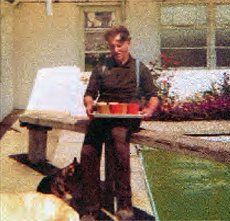 Fred Leeder by his swimming pool 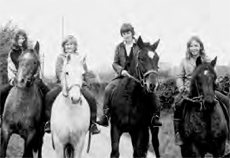 Out Riding, Left to Right: Angela Ansell on 'Silver', Karen Foster on 'Snowy' , Jane Leeder on 'Stormy' and Sheila Tricker on 'Mum' 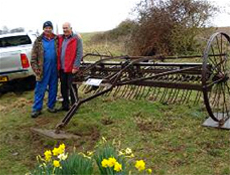 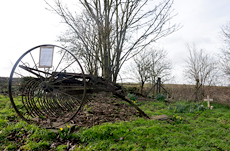