A SPRING WALK IN PRIMROSE WOOD

Primrose Wood was planted in December 1998 by the people of Boxford who helped to fund it, together with the Woodland Trust. The flower rich wet meadow is designated a County Wildlife Site. The management of the area is carried out by the Woodland Trust and village volunteers keep the paths cut. Other volunteers record the wildlife and its changes over time. There is plenty to see in Spring as it is a large area with a mixture of woodland and open spaces.

This article will help you to enjoy the wood by pointing out what you might see. You will be able to recognise some of the many flowers and trees using the identifying features.

The wood is accessed from Daking Avenue along a footpath that runs along two hedgerows, over the bridge and along a further fenced footpath. At the wood entrance the paths branch left up the hill or straight on along the valley bottom.

Spring flowering varies from year to year so being accurate as to when certain plants will appear is difficult. If you are too early for some things please visit again!

As you enter the wood take the path running uphill to your left. Field Maple (Acer campestre) trees grow along both sides and their small yellowish 5 petalled flowers open in March. The male and female flowers are found on the same tree. The 5 lobed leaves come out, in opposite pairs at about the same time and are tinged pinkish-red at first. They are hairless above but below the veins are downy. You can tell these trees are at least 5 years old as the bark on their branches is corky and fissured. 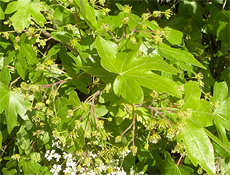 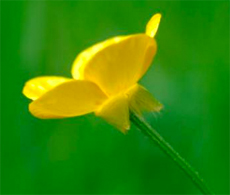 Everyone knows the Dandelion (Taraxacum officinale). We pass it by without a thought, but did you know that the flowers can be made into wine or jam? Young leaves make a salad with egg and the older leaves are cooked like cabbage. You can still buy dandelion and burdock soft drink and during World War II people used the roots as a substitute for coffee. If you look in a French supermarket you will see Dandelion shoots on the salad counter. The white latex in the stems is supposed to kill warts without hurting the rest of the skin. 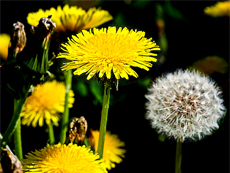 Germander Speedwell (Veronica Chamaedrys) is a beautiful little bright blue flower with a white 'eye' in the middle. Its leaves are hairy, oval and toothed. If you look very closely you will see it has two opposite rows of hairs down the stem. Bird's, Cat's or Angel's Eyes are its other names. It was used for skin complaints, asthma and coughs. 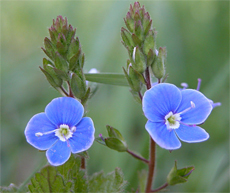 Along the top hedgerow there is the Hawthorn (Crataegus monogyna) which flowers mid May with sixteen or more white flowers to a branch. It is very fragrant.

Cow Parsley (Anthriscus sylvestris) or Kecksy grows along here. This plant has heads of white flowers and is also called Queen Anne's Lace or Break-your-mother's-heart. Look closely at the flowers; the outside ones on the umbel have petals of different sizes and there are often insects sitting on them. Each leaf is fern like. It is the first of the seven Umbellifers to flower and covers the roadsides in May. Umbellifers are plants with flower heads like umbrellas. Never pick any of them as they are very difficult to tell apart and some of them are deadly poisonous. This one is safe, but there will be dangerous ones about in the summer. 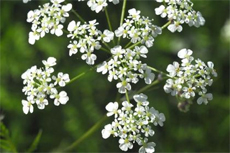 You will see Ground Ivy (Glechoma hederacea) and Garlic Mustard along this path. The Ground Ivy is a purple trumpet-shaped flower about ½cm across by 1cm long. It was used until Henry VIII's day to clarify and give beer a bitter taste. It was thought to cure almost everything so the American settlers took it with them in the 17th Century as a medicinal herb. It is now found across most of America. Perhaps the settlers from Boxford or Groton took plants from here. 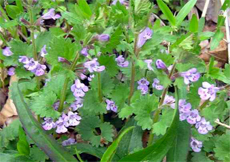 Later on settlers also took Garlic Mustard (Alliaria petiolata) or Jack-by-the-hedge to America (for flavouring), where it became a nuisance. We like it because of the mini-beasts that feed on it. It is 30cms or more high with heart shaped leaves with toothed margins. The flowers are in clusters. Each small flower has four white petals 4-8mm long and 2-3mm broad, arranged in a cross shape. The Orange Tip butterfly's larva (Anthocharis cardamines) feed on this plant, and Lady's Smock as well as others. The topsides of the wings of the Orange Tip butterfly are mainly white. Only the male has orange at the wing tip. Both can be identified by the mottled green pattern of the underside of the hind wing. The first will fly between April and June. Also look for them down in the valley as you walk back along the meadows and wooded pathways. 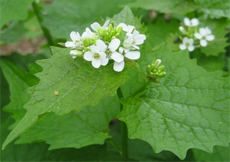 You now cross over the stiles and on to the boardwalk. Clumps of brilliant yellow Marsh Marigold (Caltha palustris) can be seen in the meadows to your right and left. It is also known as Kingcup, May-blobs or Molly-blobs and has large bright yellow flowers with five petal-like sepals and yellow stamens. The large shiny, dark green leaves are kidney-shaped. It grew in Britain before the last Ice Age and was later used to remove warts and treat fits and anaemia. Farmers hung it over the cow byres on May Day to ward off the evil witches and fairies.

At the end of the board walk you can turn left towards the Millennium seat around the Black Poplar (the path to it may be boggy). This was planted as a pole cut from a parent tree. Here you may see the Red Campion, Bog Stitchwort, Herb Robert, White Deadnettle, Large Bittercress, Ivy-leaved speedwell, and more Ground Ivy. Further on is Pussy Willow with its silver catkins turning golden with pollen. 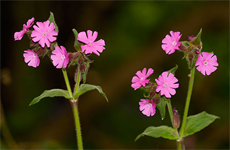 Turning right through the gate at the end of the board walk you will walk through the water meadow with its sedges, rushes and, in April Cuckoo Flower (Cardamine pratensis) or Ladies Smock. This is a tall (40cm) mauve flower of damp places loved by the Orange Tip and the Small Copper butterflies. On your way back you may also see the Brimstone, a primrose-yellow butterfly.

After you pass through the next gate, on the opposite side of the path you will see an Elder tree or bush. It comes into leaf early in the Spring and has white flowers in umbels in May. They are still used to make 'champagne', cordial, fritters and as a flavouring for gooseberry pie. It is associated with witches.

Walking through the trees you will see lots are in flower or early leaf. The flowers of the wind pollinated trees come out before the leaves so that the pollen is not hindered from reaching the flowers. You should see Alder with its little cones and catkins swinging in the breeze. Hazel, Oak, Ash and Walnut all have catkins of different shapes. The Cherry has beautiful blossom between March and May. You are now back where you started. 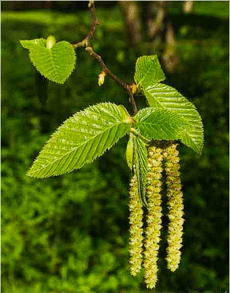