In the future I hope to explore some of the walks along, or near, the Box Valley which are detailed on some of the excellent web sites available to us. Some mention Constable or Gainsborough as their artistic works have drawn attention to the countryside around us and which the River Box runs through. I think someone worthy of inclusion in any collection of walks, and of those who may have walked them, is John Winthrop, who was born in Edwardstone and became Lord of the Manor of Groton and Justice of the Peace there. In the 52 years he spent in England, John Winthrop with his landowning interests and involvement in the legal and religious issues of the day, together with connections with friends, fellow minded acquaintances and colleagues in Lavenham, Bury, Cambridge and London knew the ways in and out of the Box Valley as well as the ways within it. Of those we know, assuredly some parts, particularly the churches, he would recognise. What is less easy to visualise now is the ideological and religious environment that prompted him, and others, to leave these villages and travel to the New World.

This walk is going to be around Edwardstone and Groton and begins by travelling up Swan Street towards The Fox along the footpath paralleling the road. Approaching The Fox, turn left through the gap in the hedge about half way along the path. Cross over the road and continue along and up the path ahead to join a road (Sherbourne Street) where you turn right. Walk along about 300 meters until you turn left onto a footpath, between a house and a bungalow, which you follow down and up two fields to turn right and then continue ahead with hedges on your left and over two foot bridges. After crossing the second bridge, turn right and walk along a broad track to the field's end where you cross a track to enter a wood ahead. At the end of the woodland bear left along another broad track until you can turn right at a large tree to enter a meadow which you cross to join a track past a house on your left adjoining Edwardstone Church. If you can, visit the church, certainly known to Winthrop and probably containing the font where he was baptized. It also contains a wonderful and telling brass relating to the Brand family who he probably knew. No time? You can read a transcription of the brass on the Edwardstone entry of the East Anglian Churches web site.

After leaving the church, go through the kissing gate opposite and then cross to the right diagonally down to a stile at the right corner of the grassy parkland. Go over the stile, cross the road and into a small plantation. Once through the plantation, up some steps and then left along the field bottom. Keeping the hedge on your left continue ahead, climbing when necessary and crossing a sunken path until you go up to, and through, a hedge to a T junction where you turn left. Follow the path round to the right and at a corner turn left, go through a hedge and follow the path, with a hedge now on your right, until you reach a road. Cross the road and go through a gate unto a path ahead passing a small wood on your right. Before you begin, immediately on your right is a public space, with benches, which provides the opportunity for a break.

Once past the wood, cross a small bridge and turn right, with the wood still on your right, to cross a field to a road by some buildings. Turn left, walk 150m down the road and then turn right on to a footpath before a house on the right. Walk along this footpath with a hedge and ditch on your right until you get to a road (1), which you cross, to a footpath continuing along the valley bottom, with hedge and ditch now to your left. You will now reach another road, which you also cross, with a house on you left and another within a 100m, to continue along a wide path to the field corner in the valley bottom. Go through the hedge, up a grassy track to the road, turn left and then right into the churchyard which you cross to the gate on your left to return to the road.

Before doing so, however, you may wish to look into Groton church (also available on the East Anglian Churches web site) which was a significant place in Winthrop's life containing the remains of his first two wives and other family members as well as being somewhere where he heard ideas and opinions which influenced his world view. Just as you enter the churchyard, from the road, a footpath leads off to the right and through a small plantation and through a gate to a grassy field where a mulberry tree stands. Is this the mulberry tree described in The Life and Letters of John Winthrop? If you are interested in the life of this important local individual, you can read the book online here as a PDF (or purchase a hardcopy here) and get a fuller understanding of him. You may also find material that you may want to challenge, contradict or refute - the dialectic of our modern world. Some of what I have written here reflects what I have read in the book but I would welcome corroboration from other sources.

Once you return to the road, follow it round to the right and just before the junction, in front of The Fox, enter the field on your left to walk down the footpath to Boxford along the path you followed some two and a half hours before. As you do think of of how John Winthrop, his son and others were involved in their carriage losing their coachman and running out of control approaching Boxford church where it finally came to a stop in pieces. Boxford traffic in January 1620 was as fraught then as it can be today it appears!

By the Way, it strikes me many will know far more about Winthrop than I do. If you would like to contribute your Winthrop walk please get in touch with Eddie and you are welcome to this space to publish it. If you have a favourite walk elsewhere in the Box Valley( focussed on another village for example) likewise submit it for publication as it will be a welcome addition to our walking opportunities. 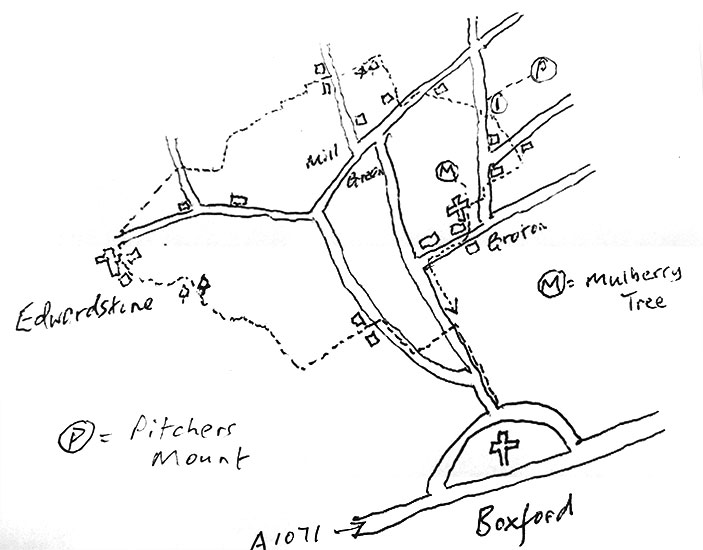