THE HISTORY OF 3PR

3PR was originally set up following a meeting on 8th February 2002 and a further meeting at Stargate (old congregational church) on 10th February 2002. Strategy and training were formulated at a meeting on 7th March that year. The logo 3PR encompasses the three parishes of Boxford, Edwardstone and Groton.

The initial cost to set up was nearly £4000, this was raised by donations from private individuals, grants from The British Heart Foundation, Waitrose Sudbury, local parish councils and local committees and trusts. Running costs are relatively low, group members opt to provide their transport and fuel free of charge although recompense is available. The group receive no direct funding so any donations are gratefully received. 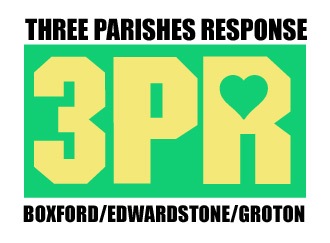 Group training was originally carried out by St.John Ambulance through a three day course and topped up by local East of England Ambulance Service paramedic Andrew Barlow who held monthly training sessions in Boxford School hall.

Since then the group has had a large number of volunteers and answered many hundreds of calls. There are still two founder members, one still responding and the other involved with the group as Life President.

Vic Rice was the original co-ordinator, retiring in 2011 and accepting the honour of Life President.

There are in excess of 70 First Responder Groups in Suffolk. Initial training/enrolment is now carried out by The East of England Ambulance Trust and the courses are still three day events, normally at a local venue. The EEAS have a dedicated Training Officer James Adams (acting) and a Community Partnership Manager Jonathan Needle both based at Ipswich Ambulance Station. In addition, some responders have also received further training and become trainers within their groups.

Boxford 3PR Group currently train monthly with the Hadleigh CFR group. Responders have their knowledge in a wide variety of medical subjects extended and refreshed by professional trainers and are each re-assessed annually by the ambulance service in order to ensure quality of care.