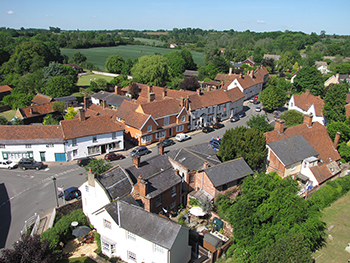 In 1960, when it was on the brink of considerable expansion, Norman Scarfe, the famous Suffolk landscape historian, described Boxford as a "village of charm, nestling in valley bottom;.... perfect village". He was referring to the way it looked then, hidden snugly in its valley and clustered around its late medieval church alongside the River Box. He was seeing streets of 15th to 17th century, timber-framed, terraced houses, albeit often "nicely refronted" in later times. No-one living here today would surely argue with his description. Even though the "perfect village" is now much expanded, the historic core remains largely untouched and is a conservation area with many listed buildings of architectural interest. 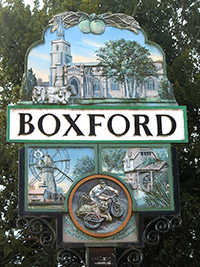 Boxford developed as an Anglo Saxon settlement long before the Norman Conquest in 1066. The village is recorded in some detail in the Little Domesday Survey of 1086 along with its surrounding farmsteads. It evolved around a natural fording place where four trackways met to cross the River Box. The trackways meandered across the rolling plateau above the valley before descending and converging where it opens out avoiding marshy ground downstream and gaining easy, dry access to the shallow ford from both sides. These route ways still dominate the structure and shape of the village.

The church was founded on the south side next to the ford, and cottages were built along these radiating tracks which are now called Church Street/School Hill and Stone Street Road. By the time the parish boundaries were "frozen" by the Church in 1180, Boxford cottages had spread north of the ford either side of the other two trackways, up Swan Street and along Broad Street and Ellis Street. In so doing it was pushing into the four neighbouring parishes of Edwardstone, Groton, Hadleigh Hamlet and Polstead whose land originally ran down to the valley floor. This became a source of conflict over centuries, but Boxford's success and prosperity in the cloth industry of the late Middle Ages led to its eventual dominance. By this time the settlement had become focussed on the north side of the ford/bridge in Broad Street and Swan Street. However, it was only in the 20th century that the parish boundaries were finally rationalised and the whole settlement became officially within Boxford parish. 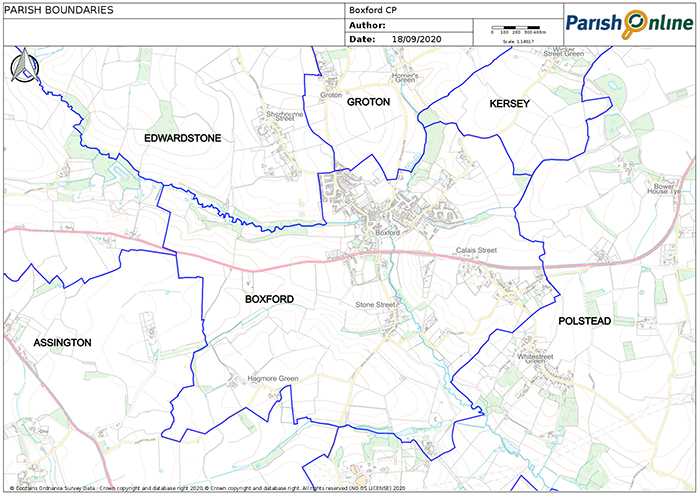 The manors of Boxford in the Middle Ages were weak with absentee owners. Many villagers were relatively free "tenant" farmers, independent of spirit and without the strictures of the manor or the inefficiencies of the "Open Field System" and strip farming so commonly used elsewhere in England. They cultivated land near their homes. Ancient, random enclosure of fields surrounded by hedgerows led to the familiar landscape outside the village today, with its network of winding narrow lanes and paths. Farmsteads clustered together around communal "greens" and patches of woodland forming the rural pattern of buildings and hamlets we still see today in the parish. 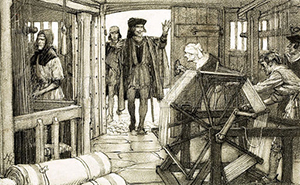 Boxford's "golden age" began around 1400 and reached it peak around 1550. For 300 years after 1400 the English cloth industry was focussed in Norfolk and Suffolk. Boxford was part of the very prosperous manufacturing district which included Lavenham, Kersey, Hadleigh, Clare and Sudbury. South Suffolk became the wealthiest place in England, outside the few major cities. Our entrepreneurial villagers were free with their guilds to make the best use of this opportunity. Many large, fine timber-framed houses were built at this time for the wealthy clothiers who organised the local manufacture and traded the cloth. This was a period of further expansion of Boxford on the north side of the river. The rebuilding and expansion of the present fine church of St Mary took place in this period, funded by wealthy clothier benefactors. The decline of the cloth trade was gradual from 1550, but by 1700 this wealth, and with it Boxford's prosperity, had vanished. It once again relied on farming and servicing the nearby hamlets and villages. 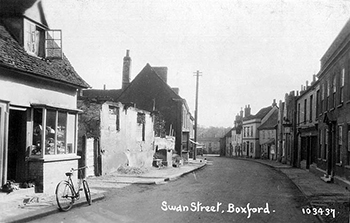 By 1700 the buildings, shape and layout of the present historic village were already established, together with the ancient hamlets at Stone Street, Calais Street and Hagmore Green. Over the next 250 years to 1945 there was little new building. The population steadily declined and dependency on the low income or wages from agriculture meant that shops and services also struggled. Many villagers were very poor indeed. Some houses became dilapidated and some cottages had to be taken down and replaced. In the eighteenth and nineteenth century there was some infill and some of the larger houses were re-fronted in the fashion of the day, hiding the timber frames behind. Brick cottages were built for agricultural workers on Cox Hill and Stone Street Road beyond the church. The Police Station and Courthouse was built by Kingsburys and Boxford House for the rector, the fine grounds becoming a place for recreation and events for the next 100 years.

The small Grammar School had been granted a charter by Queen Elizabeth in 1596 and it struggled on until 1878. When Boxford National School opened in Stone Street Road in 1839 it was the death knell for the Grammar School. Later an Infant School was added further along the lane. As well as many shops and a wide variety of craftsmen, there was tanning, silk manufacture, hat and glove making and many maltings. It was often referred to as Boxford Town because of its range of services for the surrounding area, but it was still a very self-sufficient, if poor, community. In 1838 the village gaol was built in Broad Street and now serves as a bus shelter. It never housed William Corder, infamous for the Red Barn Murder at Polstead in 1827, despite what local folklore says, nor was he put before magistrates at the Fleece Hotel. It did however house the proud Boxford Fire Brigade for many years. A very unusual feature of the village was the conversion of Chapel House in Stone Street hamlet into a Mormon Chapel in 1849. It was led by five agricultural labourers and their wives living in Stone Street hamlet and converts came from far and wide to worship there, but it had died out by 1868.

From 1875 the Great Agricultural Depression hit Boxford hard. The opening up of the American prairies led to a dramatic fall in grain and meat prices and the advent of steamships provided cheap transport. Farm work here became very insecure and wages fell. Many young people left the village for jobs in towns and never returned. Agriculture never really fully recovered until after 1945 when rapid mechanisation resulted in the loss of most farming employment and, with the amalgamation of fields, the loss of many hedgerows. During the first half of the 20th century our many shops and services began to close. However, the Village Hall was built in 1926 and the GP's surgery in the 1950s on the site of the large watermill which burned down in 1934. The following year a flood destroyed the floodgates and millpond removing the villager's favourite swimming, boating and skating place. From the 11 public houses and inns and several beer houses Boxford once had, only six were left by 1925. Today just two remain.

From 1910 the bus and lorry began to replace the horse and carrier and people began travel to nearby towns for shopping and entertainment. With car ownership rising rapidly from 1955 onwards, commuting to work in local towns became common Over the next half century there was a considerable influx of newcomers and retirees attracted to this pretty, quintessential "perfect village" with its historic core and relatively low house prices. This new money meant that much of the old timber-framed housing stock was saved and sympathetically restored to the excellent condition we see it in today.

Some local housing needs were first met in 1923 when Cosford Rural District Council built the first houses on Boxford Lane. These were followed by more on Swan Street and after 1947 prefabs and then houses to meet local needs on Homefield. By the 1950s most of the village had main drainage, mains water and electricity. Our very successful Boxford Community Council was formed in 1966 and was responsible for the development of the extensive and well-used playing fields and pavilion. It still organises many village events and supports community development in so many ways. 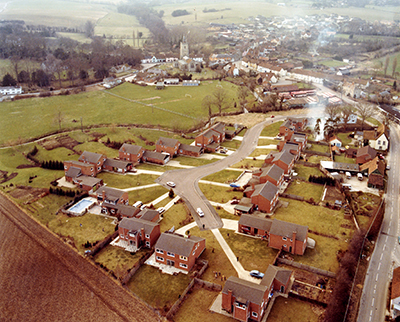 The influx of people wanting to live here meant that new housing estates of various types, rents and prices were planned and built in a rush of development. Brookhall. Holbrook Barn, Marsh Road, Ash Street, Fen Street and Daking Avenue were all started between 1967 and 1970. These were followed by The Causeway in the late 1970s. Some of these were clearly built for the professional, managerial and technical newcomers planning to commute to Sudbury, Hadleigh, Colchester, Ipswich and even London. This led to many more four and five bedroomed houses being built from 1980 on and not much housing was being built to meet local needs. By this time Boxford centre desperately needed a by-pass for the rapidly growing motor traffic and increasing size of trucks. The A1071 by-pass was completed in 1975 and for a short while Boxford was relieved of its noise and congestion.

The site for the permanent Scout and Guide camp at Boxford Spinney was acquired in 1981. It is an 8 acre site of woodland and meadow run and maintained by the local Scout and Guide Groups. In 1999 Primrose Wood was acquired by the Woodland Trust. It was created through the 'Woods on your Doorstep' project to celebrate the millennium 2000/2001. It was purchased with funds from various charitable sources and Â£28,500 was raised in just five weeks by village families. Its 28.6 acres consist of new broad -leaved woodland, unimproved grassland and water meadow. The latter is a County Wildlife Site to protect the Southern Marsh Orchids found there.

In the 1990s further groups of houses were built including Fitzgerald Meadow around 1992, Rectory Park in 1995 and Rules Yard built over the old bus depot in 2002. More recently Partridge Close 2005 (in Groton, but adjoining the village), Homefield Court 2012 and Station Field 2016 have been added, with much housing intended to meet local needs and help young people stay in the village at a price they might be able to afford. Recently still more, mainly expensive housing, has been provided at Goodlands in 2016 and Cygnet Court in 2020. 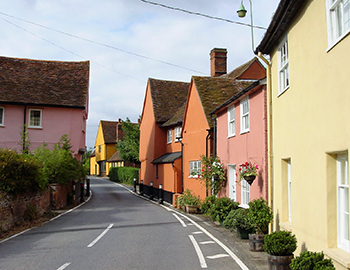 Despite these developments the unique historic core of the village nestling in the Box Valley remains largely unspoilt. One must venture out into some of the new estates and hamlets to glimpse the agricultural landscape in which it is set and on which it once so totally depended. We are fortunate today to still have the Boxford Post Office and Stores, The Village Stores, Leeder's Family Butcher, the wine shop, the Medical Centre, a hairdressers, a garage and two pubs at the heart of the village.

Those of us privileged to live here today in this ancient and unique place are but fleeting custodians. We have a duty to secure this wonderful heritage and pass it to future generations with a plan for its further evolution and inevitable growth.