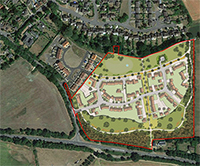 As I am sure you all know by now but on 17th June 2020, Babergh's Planning Committee approved Outline Planning Permission for 64 houses on Sand Hill.

Andrew Good, on behalf of the Boxford Society, Roger Loose, on behalf of the Parish Council and Bryn Hurren our District Councillor put up a valiant fight against this proposal – quite difficult in the 3 minutes allocated to them. However, various factors worked against them.

The meeting was a virtual one with everyone in their own bubble. This led to a rather fractured meeting as everyone wrestled with the technology and this format did not lead to any meaningful discussion of the application itself. Most of the Committee seemed reluctant to approve – in fact no-one was even prepared to second the motion so the Chairman had to do this - they were perhaps fearful of the repercussions of rejection as Babergh has recently had to pay for two successful planning appeals that went against them.

The significant objection by Babergh's own Policy Planning Officer, which was included in the report, had obviously not been read by any of the Committee and when the Case Officer was asked to comment replied that 'policy matters are a matter of balance' and no further discussion ensued.

The significant objection by Babergh’s own Policy Planning Officer, which was included in the report, had obviously not been read by any of the Committee and when the Case Officer was asked to comment replied that ‘policy matters are a matter of balance’ and no further discussion ensued.

Some of the Councillors appeared ignorant of the implications of the application and one suggested that the new Community Centre could be used as a Nursery freeing up space at the School. What new Community Centre? Catesby Estates have merely offered land on the site with no funding for building or maintaining such a Centre and as we have said before, we don’t need another Community Centre as we already have an excellent Village Hall, a Sports Pavilion and The Spinney..

We are in a Climate Change Emergency, Planning Committees should not be approving unsustainable developments like this which will potentially lead to 200 more cars in the Village. Just think of the pollution this will cause, not to mention all the traffic conflicts.

Catesby will now sell the site to a developer who will undertake the building of this estate, probably starting within 18 months. We will have to wait and see what amendments they wish to make to this Outline Planning Approval in order to maximise their profit - we can expect major changes.

So, despite vociferous objection at the original consultation meeting, a petition, many written objections, opposition from the Boxford Society, the Neighbourhood Plan Group and the Parish Council, Outline Planning Permission was approved. This is so wrong. On behalf of the Boxford Society, I will be writing to the Secretary of State for Housing, Communities and Local Government requesting a root and branch review of Planning Legislation. I know it won’t change this decision, but think we should let him know how outraged we feel that our views were able to be completely ignored. This situation has highlighted the importance of getting our Neighbourhood Plan in place which would give the Village opinion a legal voice in future applications. Hopefully our actions will prevent other villages being subjected to the same treatment.

The dismay at the outcome of the Catesby Estates Planning Application, expressed by the Boxford Society, is certainly shared by those working to produce Boxford’s Neighbourhood Plan. That work has inevitably been slowed but far from halted by Covid 19 restrictions. We had planned to present ideas for sustaining our village by smaller housing developments, designed to fulfil local requirements and to be agreed at public meetings and eventually by a referendum vote.

Whether or not the 64 dwelling development comes to pass, we remain determined to proceed with producing the Neighbourhood Plan and to take our village with us in earmarking suitable locations for appropriate market and affordable housing and other development while looking after our facilities and infrastructure and laying down community led and agreed markers for the future. It will not belong to individuals, interest groups, planners or developers; it will be the village’s plan belonging to all. We will not be at all averse to new housing providing it benefits the village in its variety; some low cost and affordable, some catering for first time buyers and some to allow up and down-sizing for young and old alike.

We already have an excellent history of the village, a vision for the future which will very possibly need now adjustment before seeking public approval and we are being guided by an experienced professional consultant, Andrea Long, who we look forward to introducing to the village when circumstances permit.

Of course our plan is not just about housing. It must cover Boxford, past, present and most importantly, the future of its infrastructure, facilities, utilities, health and education, roads, parking, transport, green spaces, pollution and, importantly, the public buildings including the church and our sustainable commercial outlets, the shops and pubs. Our children deserve a strong and safe environment and the plan must play a small but vital part in providing a thriving community.

The last few months have proved the resilience of Boxford and its hamlets. The Neighbourhood Plan should belong to its residents and help ensure the future; if current planning disappointments come to fruition (by no means certain), we must make a virtue out of necessity and have our own aspirations properly presented to decision makers. The completed Neighbourhood Plan will achieve this aim and have considerable strength in preventing the granting of planning approval for any further unwanted development in the village.