The village sign in Boxford welcomes many a visitor every year, but few outsiders are aware of the meaning of the symbolism in the design, nor of the controversy around the inclusion of various elements in it.

It all started in 1996 when Peter Haining suggested to the Parish Council that perhaps Boxford should have a village sign. It was agreed that he should write an article for the newsletter and as a result the Parish Council decided to go ahead with the project and Vic Rice was charged with co-ordinating it.

The subjects to be included in the sign were eventually decided and Vic started to research them. Ken Jarman gave invaluable help with the two mills and the other aspects of the sign. John Kirby did the initial artwork for two designs and these were shown at the 1996 Parish Annual Meeting.

Various sign makers were considered to make the sign. Brian Gaze of Ixworth was chosen after seeing his work in other villages in Norfolk and Suffolk. The first time Vic spoke with him he had just met the Queen Mother when she unveiled one of his signs near Sandringham. Peter Haining and Vic Rice visited Brian taking John Kirby's designs and the book 'Boxford from Past Photos'. Brian was asked to give his ideas for the Boxford sign. A few weeks later he presented 3 designs and elements of each were selected for the sign. The final design was presented to the Annual Parish Meeting in 1997. 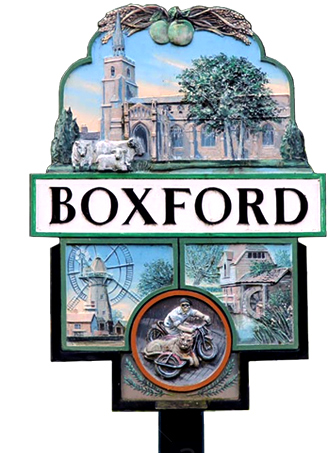 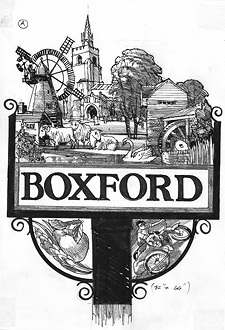 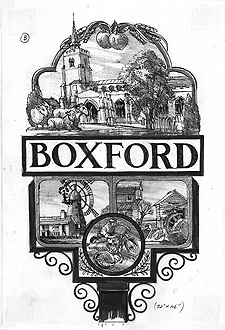 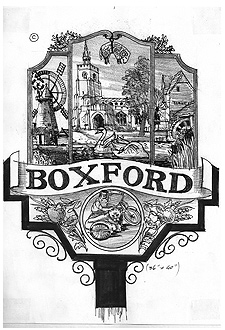 On 10:30am Saturday 14th March 1998 the sign was fitted to its chosen position in the village centre. At 12 noon, to the beautiful sound of the church bells, Suzanne Impett, then chairman of the Parish Council, unveiled the village sign to a large number of villagers who had gathered for the occasion. To add to the atmosphere John Malseed rode Tornado's penny farthing through the village and John Hutchinson rode his Vincent sidecar outfit with Noel More dressed as Briton the lioness.

St. Mary's Church
The present church dates from the 1400s. Recent works include the installation of a new bell frame and the restoration of the eight bells in 1998. All the bells can now be rung.

The River Box and The Box Tree
Boxford got its name from being the ford by the box trees. 'Mark Stones' can still be seen at the ends of the present road bridge.

The Windmill
The smock mill was at the top of the hill in Boxford, near the old grammar school. It was built in 1788. The annular sails were fitted in 1861 but these were blown off on Black Tuesday, 18th January 1881. They were replaced by normal shuttered sails. The mill was destroyed by fire in 1901. Houses now stand on the site.

The Watermill
The watermill was in the centre of the village. The mill gates created a boating lake a little further up the river. The mill was destroyed by fire in 1934. A few years later the neglected mill gates collapsed after heavy rain and the village was badly flooded. Mill Surgery now stands on the site.

The Ears of Corn
The ears of corn represents the cereal crops extensively grown in the area.

The Apples
In 1938, Hill Farm in Boxford started growing Cox's apples and has since been a great source of employment in the area. The Copella brand has become a household name.

The Sheep
Boxford was a wool town. In 1622 there were four weavers guilds with eleven clothmakers, four dyers, thirty-seven weavers, two fullers and six shearmen.

The Motorcycle And Lion
The most controversial of all the elements. In the 1920s, Tornado Smith of Wall of Death fame lived at the White Hart Inn with his parents. He was well known in the thirties for riding the wall of Death with a lioness called Briton on the motorcycle. When Briton died she was buried in front of the White Hart. 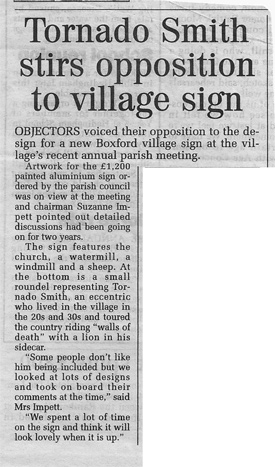 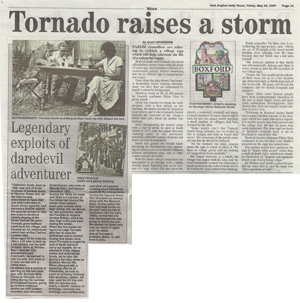 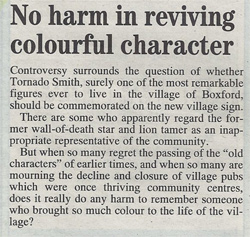 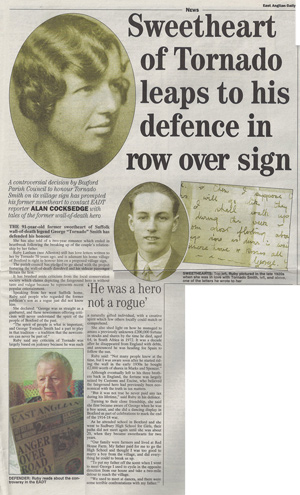 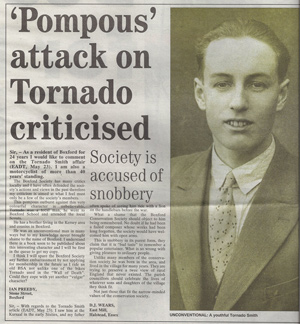 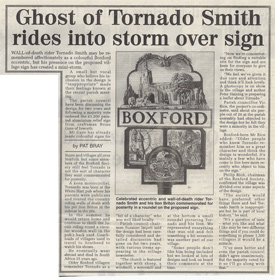 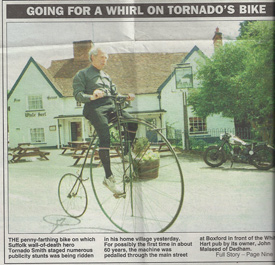 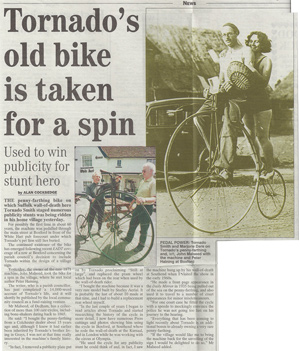 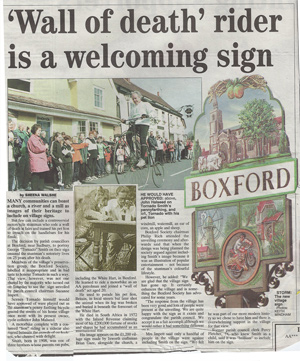 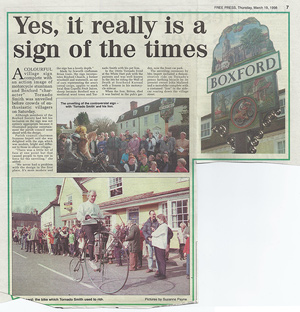 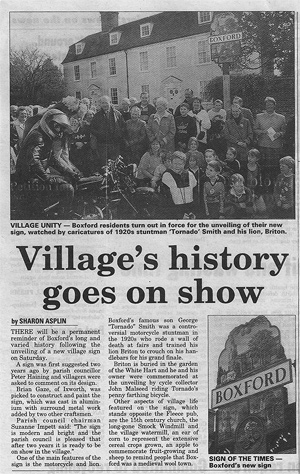 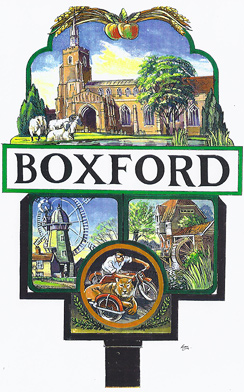