Last year an attempt was made to form a centre at Boxford of the Cambridge University Board of Extra Mural Studies and a series of lectures was started, but later had to be abandoned owing to lack of support.

Later, Stoke-by-Nayland Community Centre organised a course at Boxford often lectures on Local History by the well-known Historian, Mr. Northeast. This was successful and some 40 people from Boxford and the surrounding villages attended regularly.

Now Boxford is fortunate enough to be given another chance of establishing a Centre of the University Board, an at a meeting held in Boxford School on Wednesday evening it was decided to accept the offer and try again.

Mr. Ian Stephenson, the Head of the Stoke-by-Nayland Community Centre, opened the meeting and introduced Mr. Michael Allen, one of the secretaries of the Board. Mr. Allen explained that the Board could offer the services of a tutor on almost any subject, and there were two types of instruction which were available. First a Lecture Service consisting of 10 to 12 lectures on a subject elected by the Centre.

This required a minimum attendance of 30 at each lecture. The second type might be described as a Study Group conducted by a tutor. This aimed at getting the maximum group participation and might hold weekly meetings from the end of September until the middle of March. A minimum of eighteen names on the register was all that was required.

A full discussion followed and it was decided that the Study Group would probably be more suitable for Boxford and that Local History in which so many were obviously interested would be the most attractive subject, with Mr. Northeast as Tutor once again.

A small committee was elected to act as intermediary between the Board and the Group, consisting of Mr. Michael Bengal as chairman, Mr. C. W. Platts as hon. secretary, and Mr. Cecil Hughes, Mr. D. E. Smith of Assington, and a representative from Milden.

Mr. Ian Stephenson was thanked for organising the meeting and Mr. David Dymond and Mr. Michael Allen from the Board for their attendance. 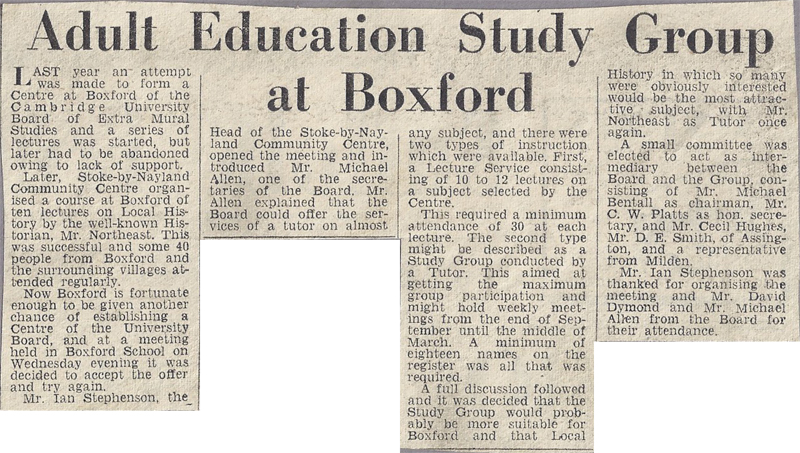