A dog which had never before touched chickens was stated at Boxford Police Court last week to have gone out with another one and participated in the slaughter of over 40 and the mauling of another ten.

"I don't think it will do it again" said the owner, who said that to teach the dog a lesson he had kept a dead chicken tied round the neck for three days.

He was ordered to keep the dog under proper control. 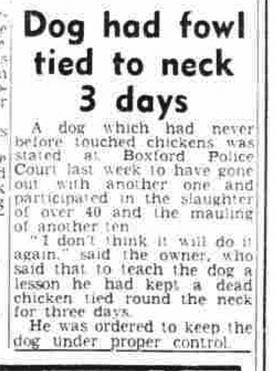