That there is considerable concern in Boxford regarding future development of the village was evident when the annual parish meeting was held at the Village Hall on Monday last.

Mr. T. C. Clark, the chairman of the parish council was in the chair and there was a far larger attendance of Boxford residents than has been the case in recent years.

Mr. Clark introduced Mr. A. T. Dunn, who represented Boxford and a number of other villages on the West Suffolk County Council. Mr. Dunn had suggested he might attend and he, Mr. Clark, had invited him to do so and to give the meeting some information on county council affairs.

Mr. Ralph Tugman raised the matter of plans for the future development of Boxford as disclosed in Part II of the West Suffolk Rural Planning Report recently made public. These he said were contradictory.

Boxford was classified as - 'A village of outstanding importance and a proposed conservation area' and, as such unable to absorb any appreciable growth. At the same time it was included in Category "C" - villages in which further land could be released for housing beyond that already authorised and irrespective of local need.

Incapable
He maintained that the present authorisations would stretch the resources of the village to their uttermost and would be quite incapable of coping with further estate development without completely altering the character of the village which the county planning department claimed they were so anxious to maintain.

He mentioned the lack of parking facilities, of pavements, of public lavatories; the narrow bridge, the size of the school, surgery, and post office, and the capacity of the water supply and the sewer.

The building of an additional 187 houses for sale was already authorised (some of which were already completed and occupied) and it was evident from the category in which Boxford is placed that further developments were contemplated irrespective of local needs.

Pie-in-sky
He also dwelt on the traffic problem which would be intensified by any future development and described the promise of a by-pass as Pie-in-the-sky. There was, he said every indication that there were many places in Suffolk with prior claims and the likelihood of money being available in the foreseeable future was remote indeed.

He proposed a resolution to the effect that representatives on the county council, the rural district council, and the parish council should do their utmost to have Boxford transferred to Category "B" which restricted development beyond that already authorised, or required to meet local need, and that no further major development should in any case be approved until a suitable Boxford by-pass is constructed.

A lively discussion took place and many aspects of the matter were brought to light. Eventually Mr. Tugman's resolution, seconded by the Rev. H. V. Koop, was put to the meeting and carried by an overwhelming majority.

Footpaths
Mr. Andrew Rollings raised the matter of footpaths, rights of way their maintenance and their signposting and the chairman informed him that the responsibility for maintenance rested on the parish council, but that such matters as stiles, bridges, etc., were looked after by the county council. Signposting depended largely on the availability of the necessary funds and no promise of immediate action could be given.

Mr. Hamilton Boyle, drew the meeting's attention to the implications of the Maud Report which if adopted would have a far reaching effect on local government and suggested that everyone should make themselves acquainted with the major changes that it's implementation would entail.

Roads Hope
Mr. A. T. Dunn said that the annual parish meeting was the only opportunity offered to a county councillor to meet his constituents en masse in any particular village, and this was the first time he had received an invitation to Boxford. He gave some statistics indicating the enormous scope of county council work. He agreed that West Suffolk roads were in a bad condition but said that expenditure on roads was being increased this year by 22 percent and £100,000 more would be spent on re-surfacing the 1,018 miles of minor roads which received no grant from the central government.

He gave some details of what had been achieved in Boxford. A complaint about road flooding had been dealt with; the provision of a foot-bridge over the river in the centre of the village had been approved by the county council but ministerial approval had been temporarily withheld. Work on the footpath on Boxford Lane, started last year, would soon be resumed and the plans for the re-alignment of the road to eliminate a hazard at Calais Street corner had been approved.

Mr. Dunn added that he fully agreed with the resolution proposed by Mr. Tugman and this was likely to be helpful to him when the matter comes up for discussion.

Mr. Dunn answered a number of questions and in reply to one on the likely effect of the Maud proposals expressed the opinion that if the report is adopted it will mean that the whole country will be urban dominated. 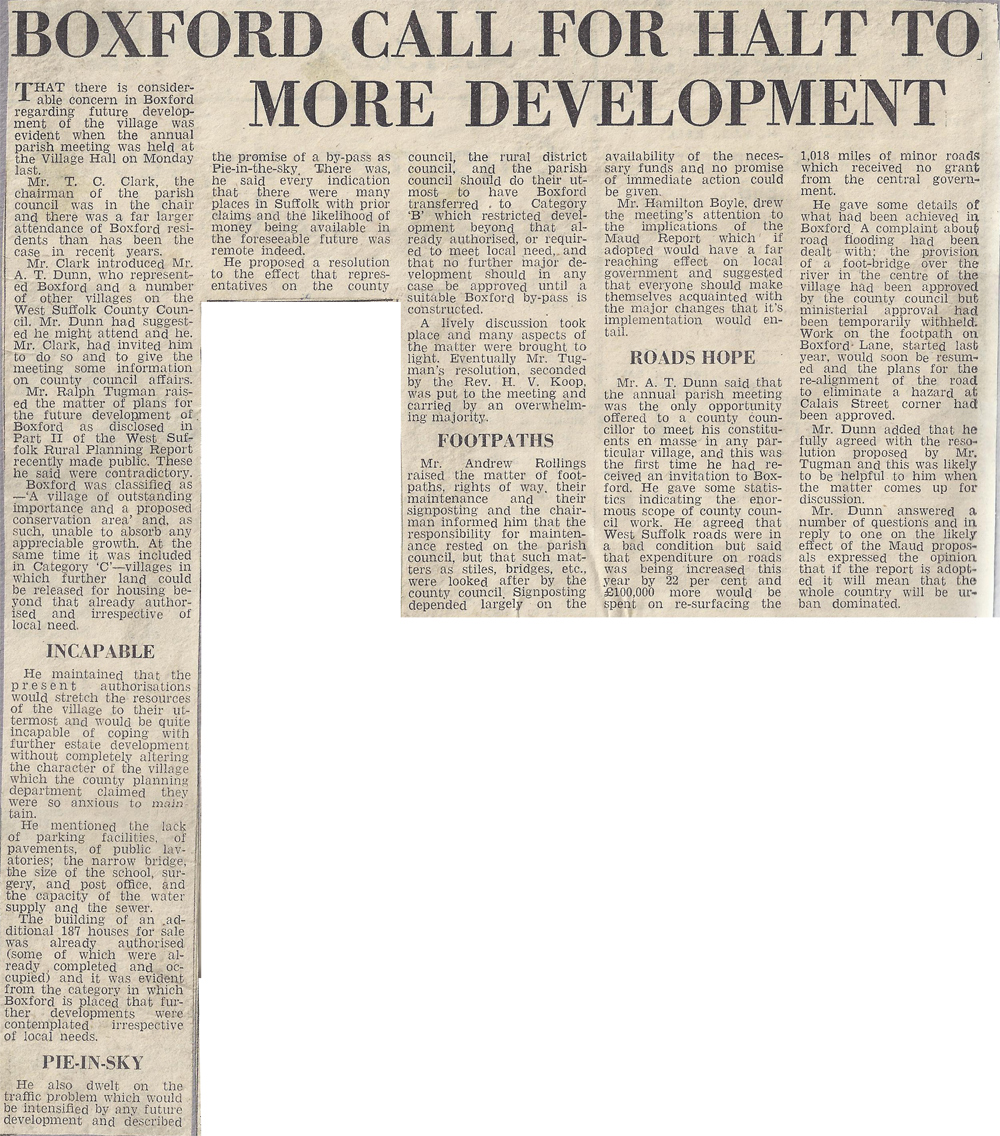