Expenditure by St. Mary's Church, Boxford, was heavy last year and the situation gave rise to some anxiety, said the treasurer, Mr. Percy Fletcher, in his report to the annual meeting of the church council.

Mr. Fletcher, who resigned his post, said that income from Sunday collections was greater than last year, although one might have expected that the freewill offering scheme organised by Mr. Gordon Lamb, which brought in £155, would have resulted in some reduction.

Thirty parishioners attended the meeting. The chairman, the Rev. H. V. Koop, said the past year had proved a turbulent one but nevertheless, a year of tremendous challenge.

Great changes were taking place in the government of the Church which, while imposing on the laity greater responsibility, was emphasising the need for stricter discipline and regularity.

Activities
He paid tribute to the churchwardens and to others who had worked during the year. He made a special mention of Miss Johnson, the secretary, and Mr. Spencer Pryor, organist.

Miss Johnson gave an account of the year's activities - the success of the Lent market; the festival of art and beauty, and the cheese and wine party; the growth of the Sunday school, and many other encouraging achievements.

Mr. Pryor made an appeal that the essential repairs to the organ should be carried out. It was agreed that a special effort should be made to raise the balance required in the organ fund.

It appeared that although there was nothing of an urgent nature requiring immediate attention there were many disturbing features in the state of the fabric.

A discussion arose regarding the qualification required by parochial church council members and it was decided to refer the matter to the Bishop. There had been four resignations.

After the meeting, colour transparencies were shown of the church and the village, and a number showing the flower arrangements and displays exhibited at the various festivals held. 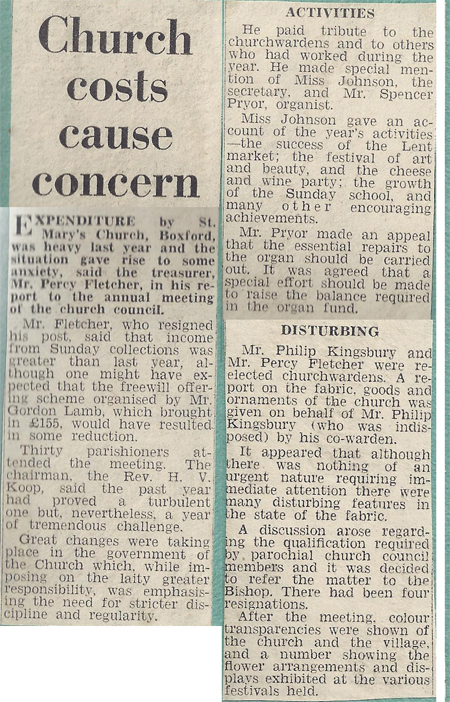