Chairman of the West Suffolk County Council, Brig. J. T. Aldous, gave an assurance last week to those who are apprehensive about the future development of the county. While expansion is essential, he said, great care was being taken to prevent such expansion from despoiling the beauty of the West Suffolk countryside.

The occasion was a dinner in the Bull Hotel, Long Melford, given by the chairman of Cosford Rural Council, Mr. Hamilton Boyle, to mark the completion of his term of office.

Brig. Alders said that he had been asked to speak on planning and this was a particularly difficult subject on which to report. In West Suffolk, he said, they had some very lovely agricultural country and many very lovely villages, but if they were to keep these villages alive, they must come up to the fact that opportunities for employment must be created by the establishment of industries and the expansion of nearby towns.

Some villages, of course, lent themselves to expansion more than others and that an attempt had been made to classify villages in a number of categories. But these categories, he said, were not static, and it was the intention to review the classification at various intervals taking into account any change in circumstances.

It was particularly important not to attempt to expand many of the lovely villages too rapidly. However, schemes for which planning permission had already been given could not be halted, but a review after four years when present planning consent would expire, and a further review in 1981 when the present town development was expected to be completed would be undertaken.

Brig. Alders concluded by thanking Mr. and Mrs. Boyle for their hospitality and congratulated Mr. Boyle on the success of his work as chairman of Cosford Rural Council. 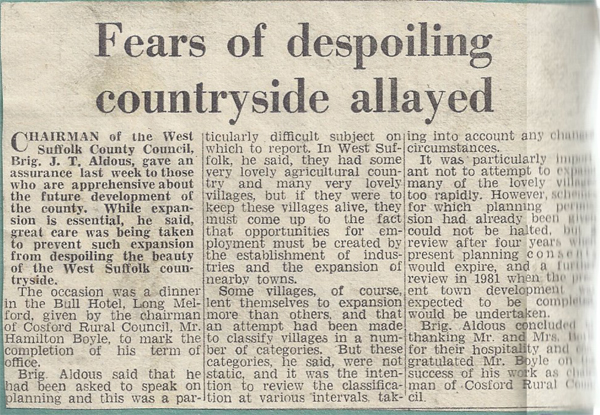