Going for a song packed them in

So great was demand for tickets for Boxford's 'Going for a Song' competition that many had to be refused, and there was 'standing room only' at the Fleece Hotel on Friday evening.

An audience of nearly 100 people listened with the greatest interest whist two gifted amateurs and two professional experts attempted to identify and evaluate a number of 'antiques' which had been collected by Mrs. Constance Chiswell and a small committee. The function was arranged to provide entertainment and at the same time to help the Boxford Community Council in their efforts to raise money for the Sports Pavilion Building Fund.

The amateurs were Mrs. Gilson Taylor from Glemsford and Mr. Leslie Curtis from East Bergholt, while the experts were Mr. Charles Morse, a member of the British Antique Dealers Association, late of Frinton and Groton, and at present of East Colne - he specialised in early English and Continental furniture, sculpture, paintings and other works of art - and Mr. George Savage, who has a joint interest in Swan Antiques, Boxford. He is an internationally known art historian and expert, and the author of many standard works on the subject.

The exhibits varied from a Clichy paper-weight, valued at £1,500, to a 19th Century self-setting mousetrap (probably after an orginal design by Heath Robinson), valued at £4.

The skill of the amateurs was outstanding. They were able to identify most of the articles with extraordinary accuracy and, in their valuation, they were seldom very far from the experts' decisions. It was fitting that the contest between the amateurs was declared a tie and Mr. Curtis renounced his claim to a share in the prize to his charming opponent who was presented with a handsome volume of one of Mr. George Savage's works. 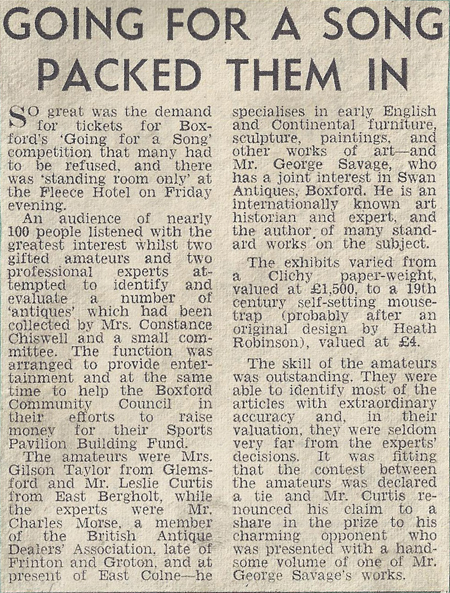