Whether you are an art expert or just a lover of art, or even someone hitherto uninterested in architecture, sculpture, or painting, a visit to Florence can be guaranteed to provide you with almost a surfeit of exquisite pleasure.

A tour of Florence, which included a day visit to Siena, has just been completed by a party organised by Mr. and Mrs. Michael Chase of the MInories, Colchester, on behalf of the Associates of that Society, and they were wise enough not to attempt to show the party too many of the treasures of this remarkable city, but gave ample time to enjoy some of what are acknowledged to be the greatest artistic masterpieces ever produced.

The fact that the weather was perfect, the organisation faultless, and the accommodation adequate, naturally added to the enjoyment. The feature, however, which contributed most to everyone’s delight was the capacity of Mr. and Mrs. Chase, not only to draw attention to outstanding works, but also to explain in a charming manner to those less well versed in art appreciation, some of the reasons why they were so entirely satisfying.

Florence is almost ideal for the tourist in that most of its art galleries, its cathedral, its churches, its palaces, and its museums are situated within walking distance of the centre of the city, and one can in the course of a day see so many beautiful things without wasting much time in travelling.

Perhaps one of the greatest revelations of the visit was the wealth of genius which accompanied the great up-surge of learning - the Renaissance - in the fourteenth and fifteenth centuries, and the extraordinary volume of magnificent work produced by the individual artists.

Most of the sculpture, the frescoes, and the paintings are based on religious themes, and the manner in which these men communicated their profound faith in the birth, the life, the death and the resurrection of Christ, can only be attributed to divine inspiration which enabled them to create works of the purest harmony and beauty.

It is even more remarkable when one remembers that whilst these great masterpieces were being produced in profusion, the whole of the countryside was engaged in almost unending conflict. The city of Florence itself was continuously at war with its neighbours, and at the same time divided in itself between contending factions.

During the visit opportunity was also taken to see some of the beautiful country in which Florence is situated - its olive groves and vineyards, its fruit trees in blossom, cascades of wisteria; and perhaps most characteristic of all, its myriads of stately cypresses pointing to the sky.

Words cannot adequately express one’s gratitude that in this troubled world one can still see and appreciate such beauties of nature and such quintessence of art. 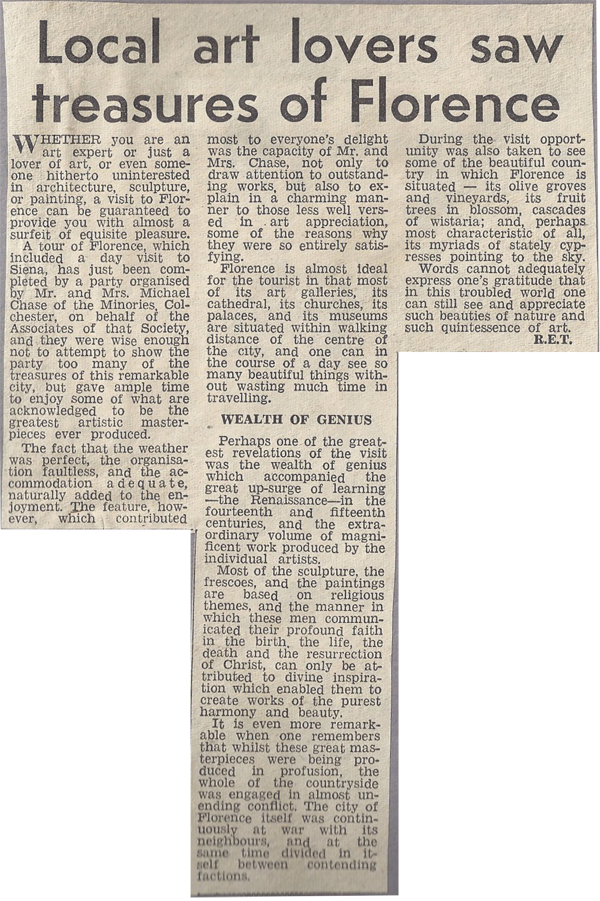