The children and the birds

Near Boxford Primary School high voltage electricity lines run from the main line to a transformer. Last year many of the boys and girls witnessed the agonising death of a swan which flew into the wires in the adjoining meadow and were naturally distressed.

This year, being Nature Conservation Year, the children have been encouraged to watch from their schoolroom window the many birds of different species frequenting the field through which the river flows, and special interest was taken in a pair of herons which, it was hoped, would be mating in the spring.

Dead heron
But, alas, a few days ago some of the older boys found the dead body of one of the herons below the power lines.

The children discussed the tragedy amongst themselves and Sally Clarke, aged 7, remembered reading a story in which corks had been strung on a dangerous line to make it more easily seen. So it was decided to write to the manager of the Electricity Board making this suggestion and asking if something could be done to prevent further accidents.

Four children - Sally Clarke, Mimi Curran, Julie Meekings, and David Strahan, all aged seven - wrote letters which were forwarded by their teacher. Almost by return a representative of the Board called at the school and a letter was received stating that methods of protecting the birds were being considered.

Removing hazards
Less than a week later came a further letter promising that the lines would be insulated and the information of the conductors would be changed in a number of spans of the main line which would present less of a hazard to the birds. The work is now in hand.

The speed and manner in which the Board reacted to their interest in the safety of the birds delighted the children and has made a most favourable impression on the staff as it will, no doubt, on all who read this sad story with its happy ending. 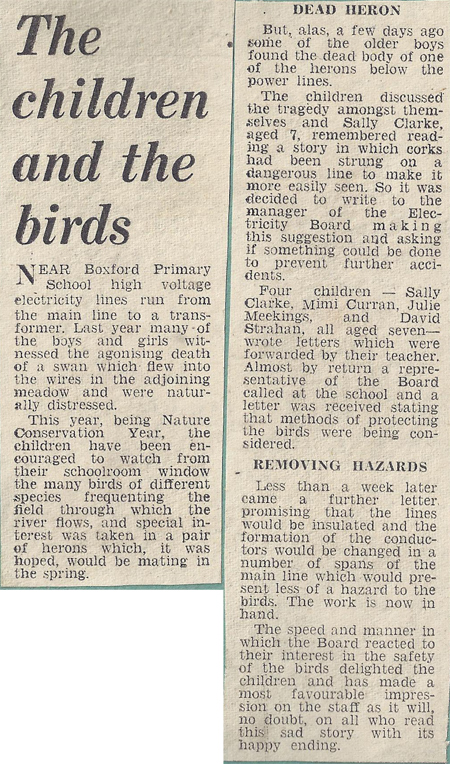