At a special joint meeting of the Boxford Community Council and the Playing Field managment committee held on Tuesday last the plans of the new pavilion were formally agreed to and the thanks of the meeting were recorded to Stanley Bragg and Associates for drawing up the plans and illustrating them in an attractive manner.

Advantage was taken of the opportunity to discuss financing of the building which is estimated to cos £4,750. The chairman reported that we had got off to an excellent start and although it would take a lot of perseverence he had no doubt that with the help of all those who had the future of Boxford at heart, we should raise our sharee of the cost. Already several functions were in the course of preperation - a dance at the village hall on March 14; an antique evening 'Going for a Song' at the Fleece Hotel on April 3; target golf on the Croft Recreation Ground on April 18 and the annual fete on June 6.

Members present readily agreed to support the Grand National sweepstake, tickets for which are now being sold and the importance of getting more subscribers to 'Little Ernie' was once again stressed. The need for tennis courts on the recreation ground was mentioned and Mr. Philip Kingsbury expressed the opinion that a grass court could be improvised by rolling and cutting an area at the south end of the field which had already been levelled, and enclosing it with fish netting. This, he thought, could be done at a small cost and would give a useful indication of the extent of the demand for permanent courts. The suggestion was agreed and it was decided to pursue the matter further.

St. Valentine
The Eve of the Feast of St. Valentine was celebrated in no mean fashion at The Fleece, Boxford, when the lady members of the Bowls Club, assisted by the wives of members, held a most successful dance.

In spite of the wintry weather, there was an excellent attendance and the very attractive decorations provided just that care-free atmosphere essential on such an occasion.

It was a double celebration for the chairman of the ladies' section, Mrs. Hilda Rule, as it was her birthday, and Mr. Percy Fletcher, the hon. secretary of the club, presented her with a bouquet on behalf of all the members.

Popular 'Brian and Mick' provided the music and very largely contributed to the success of the evening. This particular combination gets more and more popular with Boxford people every time they appear.

The refreshments on the usual generous scale were all provided by the ladies, together with excellent raffle prizes and, as a result, the funds of the club benefited to the extent of no less than £41 15s. 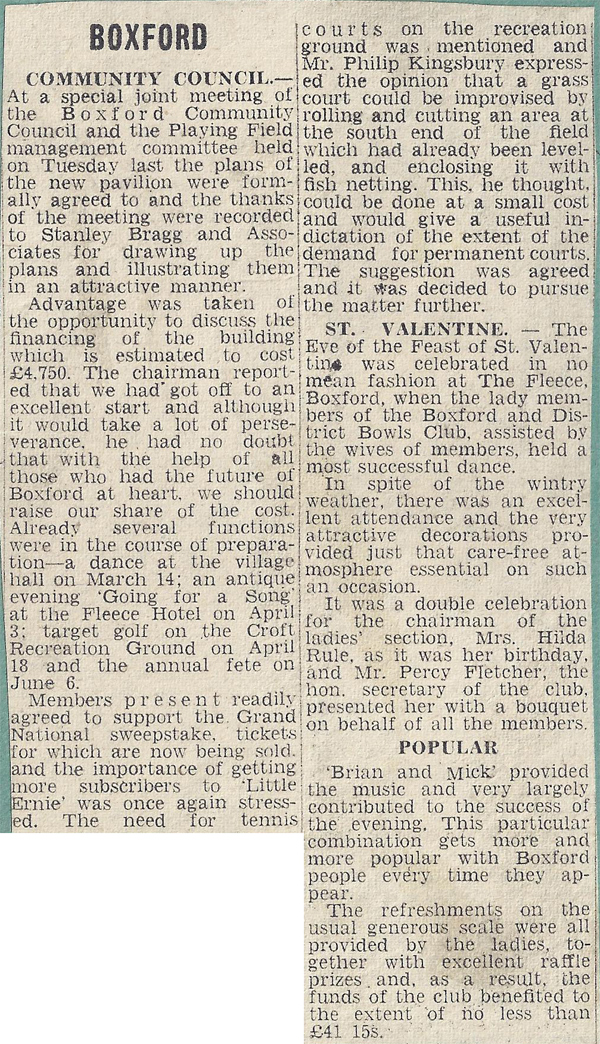