The annual meeting of Boxford Community Council was held at the Village Hall on Friday evening and the attendance was most encouraging. Between 30 and 40 were present and keen interest was shown in the many subjects which came up for discussion.

Mr. Ralph Tugman, the chairman, gave a comprehensive report on the year's working. It had, he said, been a year of considerable achievement but it had had it's disappointements. On the credit side, we had managed to obtain the promise of a grant to build the pavilion; we had bought, restored, and erected a hut which provided temporary changing accomodation and storage of equipment; we had bought a second-hand Land Rover and gang mowers which enabled us to cut the grass without calling upon the generosity of local farmers; and considerable use had been made of the football pitches and the children's playground.

On the debt side we had had very disappointing attendance at meetings with the result that important decisions had had to be taken by a small proportion of members, and the mis-use of the hut had caused serious misgivings regarding the wisdom of building a pavilion although we wer now fully committed to it.

As for our plans for 1970, we aimed to raise £1,000 to pay our share of the cost of the pavilion; the fete committee under the chairmanship of Mr. George Farrow, was busy with plans for a fete on Saturday 6th June; we hope to prepare a grass tennis court which can also be used for netball, and we intend to complete the junior football pitch which still lacks proper goal posts. We are also applying for a grant for the construction of two hard tennis courts but we do not expect to get one for some time to come.

Mr. Tugman mentioned that he had applied on behalf of the council and obtained planning permission for the use of the Boxford Charities Field as an extension to our present field and was hoping to obtain a lease in the near future.

Mr. Tugman thanked all who had contributed to the progress which had been made and especially Mrs. Maisy Tricker, the organiser, her helpers and subscribers to the 'Little Ernie' draw which had provided a steady income throughout the year.

After a number of other points were satisfactorily disposed of, the report was unanimously adopted.

The audited accounts were presented by the chairman, who explained that he was presenting them in place of Mr. Stedman, who had to resign towards the end of the year owing to other commitments. The financial position revealed by the accounts were very satisfactory and that we had increased our cash balance over the year by approximately £600. It was pointed out, however, that if we are to complete our plans for 1970, we could not afford to relax our money raising efforts in any way. He drew attention to the forthcoming dance at the Village Hall, 'Going for a Song' at the Fleece Hotel on April 3, the Sweetstake on the Grand National and the fete on June 6. The accounts were adopted.

Mr. Rollings told the meeting that he was hoping that a branch of the Ramblers Association was about to be formed in Sudbury with the idea of keeping open rights of way. The meeting expressed its interest in the project. 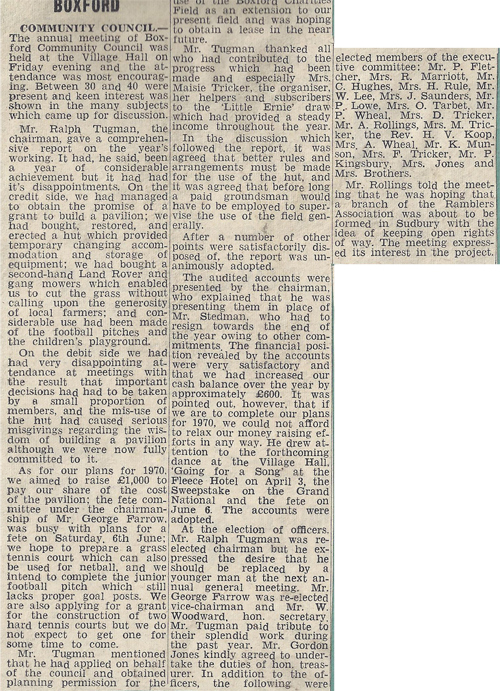