Boxford Bowls Club 'A' and 'B' teams are both in the same league this year...for the first time in their history

For the first time in the club's history Boxford Bowls Club has two teams in the Sudbury Mixed Triple League (SMTL) this season.

The first match for both teams ('A' and 'B') pitted them against one another last week.

A game of friendly rivalry ensued and resulted in 'B' beating 'A' on all three rinks, winning by 56 shots to 44 and taking all five points. 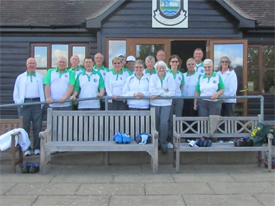 In their summing up both Margaret Blakebrough (captain of the 'A' team) and Steve Marszal (captain of the 'B') acknowledged the good humour in which the game had been played and stated that this was only the beginning.

Steve could remember the time that Ipswich beat Norwich in the Premier league but then Norwich went on to win the title – so he told his team that although 'B' had beaten 'A' this time it still leaves everything to play for!

In their second match of the season in the Bowls England league they beat Cornard 'A' in a closely fought match.

Both teams won two rinks each with the overall points score hinging on the final rink to finish. The final tally was 70 shots to Cornard and 71 to Boxford. Boxford therefore took four points from the match to Cornard's two.

The Boxford team was led by Malcolm Jones (captain).

Then, the club had mixed fortunes.

Boxford 'A' were at home to Cavendish in the first Federation League division 1 match of the season and Boxford 'B' were away to Sudbury 'C' in league division 3.

Boxford 'B' met strong opposition from Sudbury and lost on all three rinks with a final score of Boxford 56 shots and Sudbury 88.

The Boxford team was led by Margaret Blakebrough (captain).

However, Boxford 'A' were the decisive winners in their match taking all three rinks with an overall shots tally of 87 to Cavendish's 44. Boxford took all five points from the match. Boxford's team was led by Andy Barnes (captain).