Tributes paid to Mary, the face of Boxford newsagents

Boxford News closed as a mark of respect on Tuesday for the funeral of former owner Mary Riddleston, who died at the age of 92.

Following a stroke earlier this year, Mrs Riddleston was recovering at her home in Brook Hall Road, but died on Easter Sunday. She lived with her daughter Liz Corner and son-in-law Fred Corner.
Boxford News, which is currently up for sale, placed a letter to customers in its window saying it would be closed for her memorial service at St Mary's Church in Boxford on Tuesday afternoon.
Mrs Riddleston and her late husband Herbert ran H D and E M Riddleston newsagents in Boxford for 37 years, 12 of which she ran single-handedly, and it was known affectionately as Mary's.
The daughter of local entrepreneur Newton Rule and his wife Eveline, Mrs Riddleston was born and educated in Boxford. 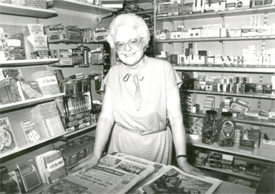 She was well-known in the village not only for being the local newsagent, but also as a keen sportswoman. She was ladies captain at Stoke-by-Nayland and Newton golf clubs and was a member of the Boxford Bowls Club.
In 1963, she appeared in The Daily Sketch newspaper when she won the All England Fours in bowls for Boxford, with Dorothy Panks, who lives in Hadleigh, and the late Hilda Rule and Mary Williams as her team-mates.
The national paper ran a whole page article featuring the four's victory, along with photographs of Mrs Riddleston, which her daughter describes as "quite some feat for Boxford as it was against 500 teams from all over the country".

Mrs Corner said: "My grandfather, and later his son Archie and grandson Barrie, ran Rule's Coaches in Boxford, which was taken over by Beeston's.
"Mum always wanted to be independent so my grandfather agreed to buy the newsagents when it came up for sale after the war, but she had to pay him back. It was only a loan."
Before running the newsagent, Mrs Riddleston worked in Sudbury.
"She cycled to Sudbury every day to a ladies fashion shop. She got five bob [25p] a week and had to scrub and polish the floor before she left every night," said Mrs Corner.
"Then she went to work for Moodys library in Sudbury which had been established for 100 years, but unfortunately that closed so she came to a building company in Boxford called W B Kingsbury and Sons in Swan Street, working in the drawing office."

After meeting Herbert, from Polstead, at a dance in Boxford Village Hall, they married in 1942.
They started the business in Swan Street in 1945 and traded there for seven years, after which the couple moved to the shop's present location in Broad Street. Mrs Riddleston retired in 1982.
Mrs Corner said: "I recall moving from Swan Street to Broad Street. I was only four years old and they used my pram to move the sweets across the road - the wheel came off on the last load."
She said her mother had a "cracking" sense of humour. "We've had so many cards from people remembering her and saying she was always a good friend. Her roast dinners for family and friends were legendary," she added.
Mrs Riddleston leaves behind a daughter, two grandchildren, Mandy and Alan, and four great grandchildren. Her sister Brenda Moody, 84, still lives in Boxford in Broad Street.