Three employees at a family farm have been awarded accolades after notching up a total of 114 years' service between them.

The trio, who are employed at Boxford Suffolk Farms and Stoke by Nayland Hotel, Golf & Spa, were presented with Long Service Awards at this year's Suffolk Show.

David Whymark started work at Boxford Suffolk Farms 41 years ago at the age of 16. He had no qualifications and was dyslexic, although this wasn't a condition recognised in those days. His first job was cleaning out blackcurrant buckets and he went on to work in the orchards and packhouse, depending on the season.
He is now workshop manager, and he is justifiably proud to have also gained a 2:1 degree in agriculture from Writtle College at the age of 43, having studied there one day a week for four years.
David said: "I've seen a lot of changes over the years - we used to grow 187 trees to the hectare and we now grow 4,000 trees to the hectare on our new plantations. We also now use computerised trickle irrigation systems in the new orchards instead of the old fashioned rain guns which wasted a lot of water."
David's mother, Eileen, worked for the Peake family as a cook at the golf club for 17 years during the 1970s and 80s. 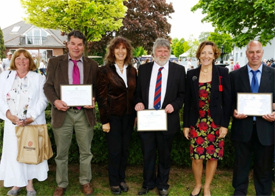 Chris Moore, who is celebrating 36 years of service, also came to work at Hill Farm Boxford for the Peake family straight from school aged 15. He started in the packhouse making up cardboard boxes and helping to load up the lorries. He then went on to work in the orchards doing a variety of jobs during the apple and blackcurrant seasons.
He later studied a week a month for six months to gain City and Guilds qualifications in top and soft fruit management.
He is now orchard manager and oversees from between 24 and 60 staff during the course of the season.
Chris said: "I love coming to work on the farm as there is always something different and interesting going on, depending on the time of year. It is great to work with such a nice family who are all very approachable, and I am part of a really great team."

Kevin King began working on the golf course at Stoke by Nayland for Bill Peake in 1978 at the age of 17, just before the completion of the second championship course, the Constable, and a year before Bill died.
Thirty-seven years later, he is course manager and still loving the job. He is proud to have played a crucial role in perfecting and maintaining the two championship courses in tip top condition so that they have regularly attracted international televised Professional Golfers' Association (PGA) and European Tour events.
"I have seen some huge changes at Stoke by Nayland during my 37 years here," said Kevin.
"It was just a golf club when I joined, and since 1999 the Peake family has built the hotel, conference centre, fitness club, spa and country lodges."
Kevin, whose mother-in-law Joy Howard worked as manager of the original golf club for many years, has always lived with his family in a cottage on the golf course.
The family-owned Boxford Group, which incorporates Boxford Suffolk Farms, Stoke by Nayland Hotel, Golf and Spa and Peake Fruit, employs more than 250 staff.
The business started in 1938 with a 120 acre apple farm and is still run today by the same family, who are siblings, Susanna Rendall (managing director), Tamara Unwin, Jonathan Loshak and Carmella Meyer, and Susanna's son Robert Rendall.