Need to downsize? Boxford duo show how it can be a delight to take on a smaller garden

Downsizing doesn't mean having to accept second-best in the garden. Steven Russell discovers the hints of Italy and Cornwall behind a Suffolk village... and, by the by, hears how an ex-SAS action man-turned-author came to live in the county

It was in 1979 that John Kirby and Joe Barrett left south London for our neck of the woods. For a house in Mersea Road, Colchester. It was something of a voyage of discovery. John admits they hadn't even known of Colchester's proud military heritage. "Looking out the window that very first morning, we saw a squad of soldiers marching past in nuclear fallout gear. That's when we realised we might be in an army town. A couple of Dumbos! Honestly..."

Not that it mattered. Of more interest was the pleasing irregular shape of their new garden - much bigger and more intriguing than the small plot they'd had in Peckham - and the opportunities it presented. John and Joe have had several homes and gardens since, but they haven't left East Anglia and don't intend to. 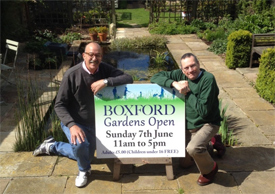 In 2007 they said goodbye to a too-big modern house, escaped the millstone of a huge mortgage and downsized to a 1930s house between Sudbury and Hadleigh, where they are now. The garden was just grass. Or, put another way, a nice blank canvas. There was a shed near the house, though. Friends pitched in and they successfully pushed it down the garden on rollers, like Egyptians might have done! Joe and John had the year before been to The Lost Gardens of Heligan in Cornwall, the restored gardens and pleasure grounds. They saw the small Italianate garden there "and we were blown away with it. Pond. Really simple", says John. The image was filed away in their memory-banks and proved inspirational when they set about their latest garden - the centrepiece of which is a rectangular pond full of goldfish. With both men now retired, they're delighted with "this moderately easy to manage garden which is almost half pond - lowest maintenance of all!"

John and Joe come from families of keen gardeners, but the story really begins 40-odd years ago when they had a little terrace house in Peckham with an "absolutely tiny" garden. "I'm ashamed to admit this," says John. "I dug a path up the middle, three feet down. I thought 'We'll have raised beds either side and a wiggly path.' Until, of course, it rained and it filled up with water like a canal."

He remembers Joe returning with a stack of plants and shrubs after coming across a garden centre. Realising he wasn't going to be able to take them on the bus, he brought them home by cab. "The taxi was absolutely full of plants," says John, "and that got us going."
They moved to Colchester when Joe, who was in the IT industry, got a job with Philips, the electrical giant. After four years they bought a cottage in Suffolk: at Groton, not that far from where they are now.
It was called The Spong. The name relates to a low-lying point where three or more fields meet. Tricky areas to farm.
The Spong was surrounded by trees and very peaceful, though the garden needed much TLC. They set to. "We could dig for England in those days," laughs Joe. It was the first "serious" garden they created.
While in an idyllic setting, The Spong was "a hell of a lot of work", says John, whose background was in graphic design. With both men working full-time, most of the gardening work had to be fitted in at weekends. Time took its toll on the cottage. "Absolute money pit, really," says John. "It needed a new roof and chimney, and I'm ashamed we didn't do any of these things; just lived there quite happily for 16 years."

The disadvantages, such as the lack of mains drainage, began to grate. "When we left The Spong, we were fed up with 'chocolate boxes' and very pretty windows that didn't really fit in their frames. The wind used to whistle through," remembers Joe. "We were conscious of the fact we'd lived there all those years and not replaced the roof, which was well overdue. We had a quote for putting on proper tiles but they said the infrastructure would not support the weight and that would have to be replaced."
They decided to move and pass the cottage on to someone able to give the place what it needed. The buyer was Andy McNab, the former Special Air Service sergeant turned novelist. He'd stay for three years or so before moving out of Suffolk. "We thought he was a model for knitting patterns!" John quips. "He was very good-looking and would stand like this." He adopts a confident, chest out, pose. "It was only later we found out who he was!"

The outgoing owners moved to Monks Eleigh, to a modern house "where all the walls were vertical; where the staircase didn't creak. But it was a culture shock. We'd never lived in a modern house. We rattled around!" John didn't take to it that much. The area was on a slope. You had to climb up to a kind of plateau where the garden was. "It nearly killed us, building the steps up to this - but amazing views across Suffolk..."
The house had not really been lived in for some time and the garden was overgrown with brambles. Relatives helped restore it to a flat plain, and John and Joe built a big pond, using bricks recycled from the night-storage heaters they'd replaced! There was also a herbaceous border and greenhouse - something they have everywhere, as Joe has the green-fingered touch with seeds and cuttings.
Many of their friends lived in the Boxford area and there was that mortgage to service; it made sense to downscale to where they are now - 5 Groton Street, Edwardstone. They had the pond dug, edged with Indian sandstone. Areas along one side of the garden are lined with plastic, which helps retain water. Here are hostas and other moisture-loving plants. On the right-hand side are herbaceous plants. "We enjoy looking after them," says John. "They're not no-maintenance. The bog garden is no-maintenance. You don't have to do anything. They die off in the winter - scrape all the leaves away, leave it. They're starting to come through now."

Herbaceously, plants include peonies - "lovely; great big blousy blooms", says John. Campanulas do well. There's acanthus (bear's breech) - "tall, stately things", says Joe.
Trellising perhaps two thirds of the way down the garden divides it, "so you don't see it all in one go - and it was a good excuse to grow good old-fashioned roses", says John. There's clematis, too.
We stroll on, past more peonies. Here's a bed they haven't yet started to clear following the winter. It's home to dahlias. Joe cuts them down and leaves the stalks so he knows where they are and can dig around them. "I would recommend dahlias to anyone: beautiful; look after themselves. Dead-head them regularly. Tonnes and tonnes of flowers, later, for the house."
There are raised beds for vegetables, and a greenhouse - naturally. It's heated during the cold weather, to keep the frost off tender plants. Among the plants over-wintering are two big pots of Brugmansia - large plants with huge tubular flowers and very strong scent. They'll go out by the pond once the weather properly warms up.

Have they got any gardening tips?
"If you like something, try it," says John.

"And I think a good rule is to 'grow what grows'," says Joe. "Don't spend loads of time trying to persuade something to grow that doesn't want to go in your soil or position. Just dig it up and get rid of it. Don't be precious about it.
"That's why we do a lot of campanulas - because they like this soil. It's quite alkaline, moderately heavy, and they seem to like it. Be guided by nature."

Joe and John's pride and joy is one of 20-plus open in Boxford, Groton and Edwardstone early in June. Technically, the event is called Boxford Open Gardens, but this year it's been expanded, geographically.
With more than 20 varied gardens, from cottage to contemporary, the event has become quite a big thing, "and we're all inherently nosy and want to see what other people have done with their gardens!", laughs Joe, on right of picture.
Boxford Open Gardens runs from 11am to 5pm on Sunday, June 7. Look out for the Garden Open signs and pay £5 at the first one you come to. This covers you for all the gardens.
There will be coffee, cakes, ploughman's lunches and cream teas in the village hall. There are also plant and cake stalls.
St Mary's Church tower will be open, for breathtaking views. And there is a free shuttle bus operating from the centre of the village. 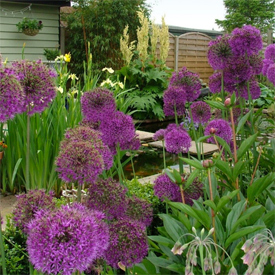 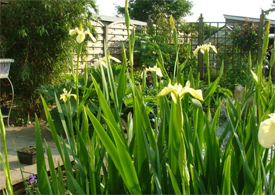 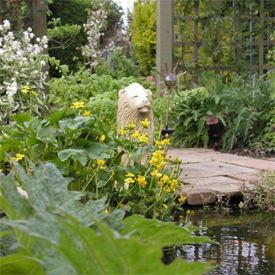 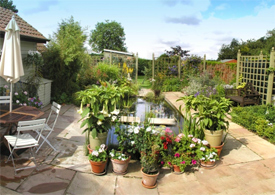 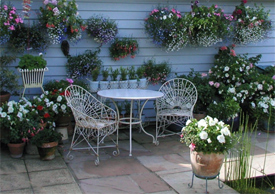