Half of word SLOW 'outside permitted area' on Boxford road

Contractors have refused to finish off painting a "slow" sign as half of the word was "outside the permitted area".

UK Power Networks contractors repainted the "SL" after they laid down cabling and resurfaced part of Sand Hill in Boxford, near Ipswich.

They said the remainder of the road markings were outside what the company was "permitted to remedy" by Suffolk County Council.

The county council said the defect would be rectified. 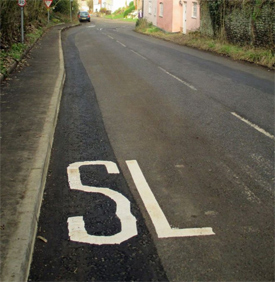 As first reported in the East Anglian Daily Times, Boxford resident David Lamming accused UK Power Networks and Suffolk County Council of a "lack of joined-up thinking" over the mix-up.

He said: "What was a lack of common sense has now turned into farce."

UK Power Networks had laid down electrical cabling to a new housing development in September.

After it was initially completed, Mr Lamming said the company then needed to return to redo the surfacing work in February.

They repainted the S and L but within a month the L had already faded.

Mr Lamming said the contractors also only repainted part of a warning triangle at the junction of Sand Hill with Cox Hill/Ellis Street, where they resurfaced the road.

"Instead of a triangle we now have what looks like a figure seven," he said.

A council spokesman said: "Regardless of whether we get UK Power Networks to go back and correct that defect, or do it ourselves, we will look to get that sorted." 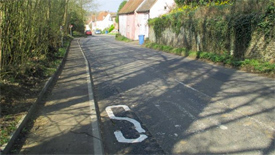 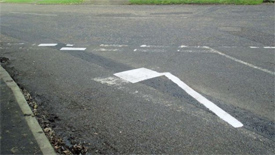