Long-serving Doreen is centre of attention

School dinner lady Doreen Jarmin got a big surprise when she went on a "training" course this week.

But instead of learning all about school policies, she found herself the centre of attention at a surprise party to celebrate her 50 years’ long service as dinner lady at Boxford Primary School.

Mrs Jarmin, 86, of Ash Street, Boxford, has fed at least three generations of children at the school - possibly even four by now, she says. 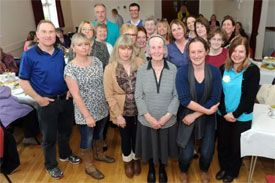 She has seen many improvements to the school's facilities over the years - including her job title changing from dinner lady to midday supervisory assistant.

Having lived all her life in Boxford, Doreen attended Boxford Primary School herself, as did her late husband, Ken, and sons, Robin and Martin.

Before she married, she worked in Sudbury silk factories and at an army battledress firm on the site of the present Aldi.

She said: "I started working at the school because my youngest son kept bringing home letters saying they wanted dinner time staff. That was in 1966, and I have loved every moment.

"I love seeing the children and watching how they progress. I give them a cuddle if they hurt themselves. It's such a pleasure to be here.

"To me, I don't know what the fuss is all about because this is something I do every day and it's something I love. I have no plans to retire."

Her surprise party on Monday night at Boxford Village Hall was certainly a big surprise.

She said: "I thought I was going to do some training. When that door opened and I saw everyone in the room, I was so taken aback. I was overwhelmed."

Staff, friends and former colleagues presented her with a necklace and matching earrings. "I can't thank them enough," she said.

Having served school dinners at Boxford from 12.30pm to 1.30pm every day for 50 years, she is now officially the longest-serving member of staff at the school. A dinner lady before her had served 48 years.

On Friday afternoon, there will be a celebration service in her honour at St Mary's Church. In the school's newsletter, head teacher Toby Barkworth-Knight said: "Many local families of all generations will recognise the impact and extraordinary achievement of Mrs Jarmin's time in school.

"In her role, Mrs Jarmin has known so many children grow up in the village - in my own family she was a 'dinner lady' for my wife Helen and her brother Gareth.

"In some instances, she is now on to her third generation, as former pupils have become parents and now grandparents. "Mrs Jarmin, of course, 'wants no fuss' but we insist," he added.