It’s Boxford Open Gardens this weekend, near Sudbury and Hadleigh

'My daughters call us The Hobbits...' Hazel Buchanan's one of the folk opening their gates to the public for Boxford's big day.

The family garden near Sudbury was most definitely dad's territory. Hazel, one of eight children, knew that. "We were never allowed to touch the garden. My father was very strict. He wasn't into letting children dabble in gardening or even sowing seeds. Very stereotyped."

Actually, thinking about it, he did soften every now and again. "I used to watch him digging up new potatoes and he'd let me ferret for them. When he was turning the soil over, you'd see millipedes and centipedes."

That doubtless fostered a fascination with and love of wildlife that endures today, and which is manifested in her own garden. 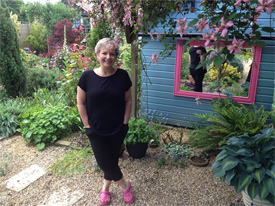 It took a while for the horticultural bug to bite, though.

"My parents divorced quite late in life. I think after eight children they'd just had enough of each other, and my mother got a little house very similar to this.

"She'd never really been allowed to touch the garden - the house was her domain, and looking after us - but she was really green-fingered. She'd break something off and dib it in the soil, as some people can, and it would flourish.

"She was like the mother in Cider with Rosie. The garden was all over the place, but everything flourished. Like Laurie Lee's mother, she tended the garden like she'd tended us eight children: everything was haphazard and just about worked, but everything turned out all right.

"I was a student nurse then. I used to see her gardening and I think that was the first time I thought 'You don't have to be an expert...' It's just wanting to create something, I think.

"I got into gardening when I got married. We had this tiny little terraced house in Colchester. I thought I'd do the garden. I got lots of books, and read them, made oodles of mistakes - like throwing away, I realise now, a beautiful batch of sweet williams, because I didn't realise they flowered the following year. It's learning by making umpteen mistakes, and I'm still making them!"

Hazel and her doctor husband soon moved to Sevenoaks, "and then I had a garden long and thin; a 1930s semi. I'd got gardening a little bit under my belt by then - got pencil and paper and sort of designed that one, with a view to having children."

After that, back to Suffolk and a house in Little Cornard with a vast garden and paddock. A huge pond was dug there, cementing that link between gardening and wildlife.

Hazel has been in her pre-war semi at Boxford for eight years now, post divorce. She insists her garden is nothing to write home about, but methinks the lady doth protest too much.

"I look after the garden but in tandem with all the bugs and beasties that are in it. The garden is just a vehicle for observing the creatures in it. I'm absolutely fascinated by them."

It was largely grass, old sheds and fallen-over apple trees and brambles when she moved in. She designed the new look, roughly, but says her approach has changed. Now, it's much less about waves of flowers that look a picture and more about giving those creatures an environment in which to thrive.

"I'm just trying to do all I can," says Hazel, worried about the effect of mankind on the planet and "really scared" about the decline in butterflies.

"I don't know what the wildlife is living on these days, so I try to make my oasis a little patch of..." Heaven?

Last year she asked her neighbours to make holes at the bottom of their fences so similarly-threatened hedgehogs could get about. Her latest wheeze is homes for ground-nesting bees - upturned pots with hay inside.

Rotting piles of logs are designed to provide habitat for stag beetles and other creatures, and a DIY "insect condominium" makes use of old hanging basket mats - which birds love to pull out for nesting.

The garden last summer hosted the reception following Hazel's marriage to Fraser, who's involved in running his family's car repairs and servicing workshops near Colchester.

"He's my inspiration, actually," says Hazel of the man she's known since she was 15 and they were at school together. "He's very laidback. He calms me down. He's such a gentle soul, he wouldn't hurt a fly, and he loves wildlife. He's my anchor, really.

"He's the hammer and nails man: the 'Fraser, will you mend this? Will you put this birdbox up? Or this bit of fencing.' He leaves what he calls 'the frilly stuff' to me.

"My two daughters, who are very, very tall, after their father, they call us The Hobbits!"

We tootle on outside for a tour of this long and sloping garden off the Hadleigh to Sudbury road. Apart from the hedge, one old Discovery apple tree and a walnut tree, everything's been planted by Hazel.

In fact, she says that communal hedge - planted decades ago by the council - is one of the biggest assets. Self-seeding, aided by the birds, has made it a hotchpotch of species (honeysuckle, field maple, rose, ash and more). A hotchpotch, maybe, but it's "a brilliant corridor for creatures to make their way up and down the garden. And birds nest in it; butterflies lay their eggs in it. It's a hiding place. It's a windbreak."

Elsewhere, Hazel points out all the aquilegia "that have just appeared". She's only ever planted one, but - for instance - a McKana hybrid has cross-pollinated with a wilder type and caused others to take root.

Catmint - this one's Six Hills Giant, she says - is one of her favourite things. Lavender doesn't fare well on this heavy-clay soil - it rots and dies - but catmint offers a similar blue flower "and it's a plant bees like just as much if not more.

"It's much hardier. You hack it down after it's first flowered - you cut it down to the ground - and it comes up again and you get a second flush of flowers for wildlife. It doesn't smell very nice, but flying insects, butterflies and bees love it."

A type of geranium she hit upon by accident. A problem patch under the walnut tree was so dry that everything perished. After Hazel opened her garden to the public for the first time, someone brought her a sprig and suggested giving it a try. Bingo. "It's bombproof. It's evergreen in mild winters, it comes up beautifully in the spring; it's flourishing in about that much soil" - about three inches - "and the bees adore it."

Clematis she never used to have much luck with, and each year had to read how to prune them. "But I've actually decided that we shouldn't do anything at all. If you keep cutting them down, it seems to me they have to regenerate all that top growth again and it weakens them and makes them prone to clematis die-back. They just do their own thing. If they die, they die."

Self-taught, Hazel used to do a lot of reading - there's still a book about wild flowers by the loo! - but her approach has been refined. "It's sort of gut feeling now - what will suit. The right plant for the right place.

"I love the look of barely-controlled chaos," she laughs. "The older you get, the less control you want. When you realise you're not immortal, you suddenly want more chaos and freedom (in the garden)."

The first thing she planted in this garden was a contorted hazel, bought because "it was wiggly and purple. When these fully open (the leaves) and the sun shines through, it looks like claret".

Heuchera adds contrast, so the plants aren't - when taken as a whole -"quite so fluffy".

"I am moving away from things that 'just look nice'. They've got to do a job: they have to have flowers that might come on during the year (like this geranium, Rozanne). Bees love it.

"And this campion is really a homage to my childhood, because when I was a kid it was everywhere. You hardly ever see it now, because it's been 'sprayed off'. Sprays drift onto hedgerows and things."

There is a small lawn, with some "short grass" kept on purpose. Great for green woodpeckers, apparently. This year they've had a family of five drop in.

Hazel is deputy matron at a home for older folk. How does she find time to keep a garden looking good?

"I'm not much of a TV person. After you've had a family, and you've been nursing all your life, you get so you can't relax. I don't sit in the garden, ever, because I'd be like every other gardener is and think 'How did that thistle... why didn't I see that?'

"If someone rings up and I'm on my mobile phone, I'll go out and weed the gravel while I'm talking. I don't like, ever, to be doing 'nothing at all'."

If the hedge is one of the garden's major assets, the pond is another. "Sometimes I shake flour on the ground, just to see what's come up to the pond. You see their footprints. All sorts of birds. We had a badger; foxes that jump over the hedge; there's mice; I think a stoat - all sorts of things."

Wasps come to drink, and vast numbers of dragonflies can be seen. It's home to newts, and last year a baby grass snake was seen swimming in the water. Hazel hopes grass snakes might lay their eggs in her compost heaps.

All she usually does with the pond is top it up with water from the butt when the weather is dry, and in autumn removes huge amounts of pond weed.

At the end of the garden is what Hazel dubs "the plant graveyard". It used to be grass. Then it became a home for her "mistakes" - surplus plants, for instance, when she'd bought too many, or plants that just weren't thriving.

"I'd put them on the compost heap and then be wracked with guilt. And so I dug a small bit of earth there and planted some, and then it just got bigger and bigger."

Everything seems to be doing very well, simply left to its own devices!

At the end of the garden is a beautiful view across the Box valley to the heart of the village. In the field on the other side of the gate, Hazel and Fraser last year watched a family of five or six foxes playing.

It's all lovely. Bet she never entertains the thought of leaving.

"I do, actually! Because I want to do another garden! I'm in my late 50s and I think I've got one more garden in me.

"I love the digging and the heavier stuff; and the barrowing. The fluffy stuff, like pruning or dead-heading, I can't bear that!

Hazel's is one of 20-plus Boxford gardens open to the public on Sunday, June 5.

Boxford Open Gardens
When? Sunday, June 5
What? About 20 gardens open in Boxford, near Sudbury, and neighbouring Groton and Edwardstone
Times? 11am to 5pm
Cost? £5 adults; accompanied children free
How? Buy 'passports' at Boxford church or any of the gardens involved. Look for 'Garden Open' signs
It's helping? Boxford St Mary's Church
What will I see? There will be plenty of gardens to explore - large and small, and of many different types: cottage, courtyard, riverside and contemporary
Food and drink? Coffee in Boxford's coffee shop, the CoffeeBox; lunches and cream teas in the village hall; tea and cakes in some gardens
I can't walk far... A free shuttle bus will operate to outlying gardens
I'm energetic! The church tower will be open to climb, for spectacular views
Anything else? Plant sales and cake stall in front of Boxford Primary School Hall.
Contact? 01787 212 264. 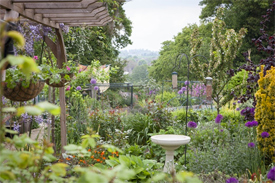 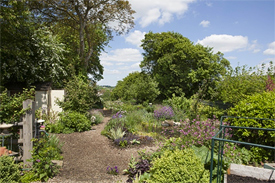 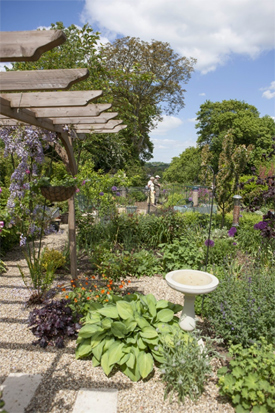