A village shop in west Suffolk which is believed to be the oldest in Britain is set to reopen on Saturday.

The Grade II-listed Boxford Stores, which has a recorded trading history dating back to 1420, used to house a general store and post office.
But in May 2013, its future was thrown into doubt after the owner, Catherine Lee, died and there was little interest from buyers prepared to take the shop on as a going concern. In the meantime due to pressure from locals, the post office has been kept running. Then in May this year, the shop and adjoining house in Swan Street were bought by Lawrence Mott, who owns Motts Body Repair Specialists in Stoke By Nayland.
Two local businessmen approached Mr Mott with their ideas for how the shop could work, and today will see their plans come to fruition. 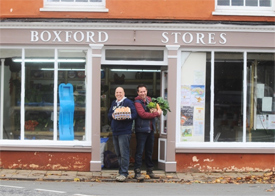 The business, which will be run as a delicatessen and farm shop, will be managed by Neil Cottrell, owner of The Village Deli in Bures. Robin Windmill, a local egg producer, will help with the buying and sourcing.
Boxford, which also boasts what is thought to be the UK's oldest garage, Riddelsdell Brothers Ltd, lost its newsagents earlier this year.
By popular demand from the local community, Boxford Stores will also sell newspapers.

Mr Windmill, said: "Neil had originally spoken to me about the idea of growing vegetables for his shop in Bures.
"Lawrence had done a great job keeping the post office in Boxford alive but was keen to get the shop part open again. So when the opportunity arose Neil and I got together to see how we could possibly make it work."
The pair put a poster up in the post office asking regulars what they would like to see in the shop. The top 10 on the wish list included fruit and vegetables, a deli and newspapers.

Mr Windmill continued: "The shop itself was in a very sorry state from years of neglect and it has been sympathetically restored by Lawrence. For the shop part, we had to have a realistic approach and we have presented it in a farm shop style.

"We are really proud to say that we have done a good job in meeting villagers' needs and we will be able to retain the personal touch that people want from a village shop.

"The community will be getting everything they requested apart from the National Lottery, which we are hoping we might be able to introduce at some point in the future."