New private homes built in Boxford have all been sold to people with a connection to the village, developers have confirmed.

Suffolk Housing, the Bury-based housing association, has completed the sale of five private properties on Station Field for the first time in its 42-year history.

It sold two three-bedroomed houses and three two-bedroomed bungalows through its subsidiary company Linnet Sales and Lettings and confirmed that all five homes were sold to people with a connection to the village, which was part of a section 106 agreement that Babergh District Council added to the planning consent for the homes. 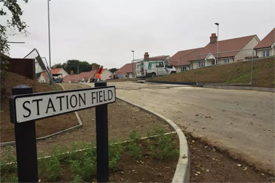 Section 106 funding is money paid by developers to local planning authorities in order to offset the costs of the external effects of development.

Doubts over whether the homes and flats on the estate had gone to locals was raised earlier this year when families living in the village tried but failed to secure homes.

Former postmistress Sally Robbie was told she was a “prime candidate” for the homes as she had lived in the village for more than 20 years. But but her son Nick, who also lives in the village, had offers on the private properties turned down. He was going to rent one of them to Mrs Robbie.

Another couple were hoping to qualify for a new flat on the development but were unsuccessful.

Owen Morgan and his fiancée Bronwen Cottrell had been living in a rented home in Hadleigh but didn’t renew their annual tenancy because they were optimistic that they would get priority for a new place to live in Boxford.

Sue Philp, chief executive of Suffolk Housing, said: “This is our first mixed tenure scheme and we are delighted that both the open market and shared ownership sales have been such a success.

“All of the properties which form part of our scheme in Boxford have been built to an extremely high standard and we are very pleased with the end result.

“We will continue looking for new opportunities to develop properties for sale on the open market so that we can invest further in our affordable housing stock and help even more people in housing need into a secure home.”

Surplus from the sale of the homes will be reinvested to improve services for tenants and develop more affordable homes. The scheme included five private properties, six shared ownership homes and 14 rented to people with a connection to the village.