Half marathon man Stuart to raise funds for charity

Suffolk dad Stuart Wainwright is on his mark and getting set to raise £1,000 for the Children's Liver Disease Foundation by running in the Colchester Half Marathon.

The cause is close to Stuart's heart as his 15 year-old son, Sam, was born with the rare liver disease, biliary atresia.

"Sam's diagnosis came as a real shock" says Stuart, of Leavenheath, near Sudbury, who is the Year 6 teacher at Boxford Primary School near Sudbury.

"We knew nothing about liver disease in children but CLDF were there with information about his condition and were also an immense support when Sam had to have a liver transplant a year later. 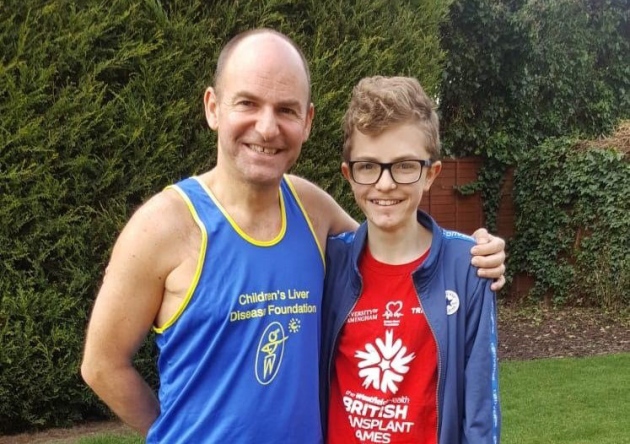 "Since then we have attended the charity's biannual conferences where we learn so much and Sam has been on a week-long trip away with other young people who have a liver condition.

"CLDF work tirelessly to balance funding research with giving children fun events to make them feel special and realise they are not alone.

"I just want to raise as much as possible for this fantastic charity."

Although Stuart has taken part in 10k runs before, this will be his first half marathon.

"Sam has inspired me to step up after winning the gold medal in the 3k event at the British Transplant Games this year," explains Stuart.

Alison Taylor, chief executive of Children's Liver Disease Foundation commented: "CLDF is the only UK charity dedicated to fighting all childhood liver diseases, by providing information and emotional support, funds for research and a voice for all those affected.

"In order to do this however, we rely almost entirely on voluntary donations, so we're delighted to hear that Stuart is taking on his first half marathon for us.

"The money he raises will enable us to continue making a difference to young people like Sam around the UK."

You can support Stuart in what will be his first half marathon by going to his JustGiving page.

Go to the CLDF website for more information about its work.