It has been standing for 600 years, but the future of Britain's oldest shop is shrouded in doubt today after it was put up for sale. 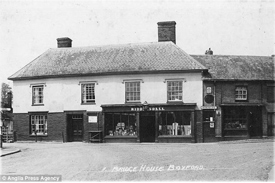 Historians have discovered the post office and stores in a tiny community of Boxford, Suffolk, was originally used as a warehouse for buying and selling wool and fabric as long ago as 1420. Over the following centuries the building has been home for butchers, grocers, ironmongers and drapers and since the start of the last century it has been a successful general store and post office.

Coincidentally, the village is also home to Britain's oldest garage, Riddelsdells, but the future of one of the venerable businesses is now in doubt after the 94-year-old owner of the village shop died and its executors put it on the market.
Sub-postmaster Richard Gates said: 'We all hope the new owner keeps the shop open, There has been a lot of interest in the Stores - it would be perfect for someone like a burnt-out banker who wants to do something else.

'It has become part of the village landscape and we get customers who have been coming in for all their lives.
'They started as children buying penny sweets on their way to school and now they collect their old age pensions here.'

Mr Gates, 68, who has managed the post office for 15 years, added: 'Most things you need in life can still be bought in the village - we have a paper shop, general store and a butchers

'The nearest other post office is at least six miles away in any direction so we would like to see it kept as a going concern - and I'd like to carry on looking after the post office.'

But the five-bedroomed property will need complete renovation - nothing has been done to it since it was bought by retired Army Major John Gaussen and his wife Christina fifty years ago.

As it is a Grade Two listed commercial premises any change of use would have to be approved by the local district council - who are notoriously keen on preserving the character of old buildings. Major Gaussen died in 1997 and his wife eight years ago at the age of 89 when the Stores was left to Mrs Gaussen's elderly sister Catherine Lee, a spinster who lived eight miles away in Lavenham.
She allowed the staff of three to carry on running the place but now after her death 15 months ago aged 94, the executors of her will are keen to sell and settle her estate.

The heavily-timbered building - which has changed little in appearance for several centuries, also contains a remarkable unaltered two-storey barn.

In the early 20th century Buck Riddleston - whose family also owned the village garage - extended the range of goods on offer to include clothes, dresses, shirts, stockings suspenders.
However Boxford Stores is now on the market and village's population of 1,200 is anxious and hoping that it will continue in its present form as a deli, fruit and vegetable shop and sub post office.
Boxford Society archivist Tina Loose said: 'It is an extraordinarily well-preserved building and much of it remains unchanged.
'It has been part of village life for centuries and there is a door in the shop that is covered in masses of signatures of the people who have worked there over the years.'| Medieval buildings expert Leigh Alston, who examined the property, said: 'It may well have served as a building containing market stall or shops within arcaded walls while the rear contained workshops and warehousing.'
Architectural historian Mr Alston, who teaches at Cambridge University, said: 'The building contains any number of exceptional features which had they all survived would represent a rare survival from the Tudor world.
'Bridge House remains among the most fascinating and beguiling buildings in a county which is justly famed for them.'
The lime-washed property - which includes five-bed living accommodation - is now up for sale through agents Jackson Stops and Staff for £565,000.
Partner Tim Dansie said: 'It would make a lovely home as well as a unique business opportunity in a remarkable historic building.'

Boxford, from where the Pilgrim Fathers left for America in 1620, also boasts Britain's oldest garage - once run by the same family who owned the post office stores. Riddelsdells opened in 1900 when it looked after steam-driven cars and mended farm carts. 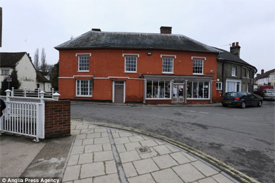 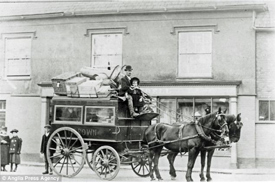 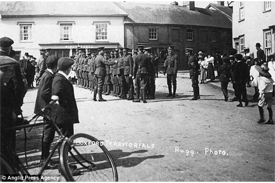 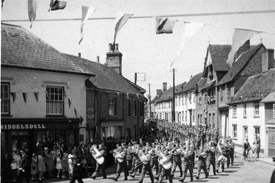