A Boxford nursery which also operates a breakfast, after school and holiday club for children up to 12 has received an outstanding rating from Ofsted.

Sunflowers Childcare is based in a single-storey cabin built in 2011 in the grounds of Boxford Primary School.

It has 105 families registered on its books and, as well as catering for children who attend the primary school, it offers clubs in the school holidays. 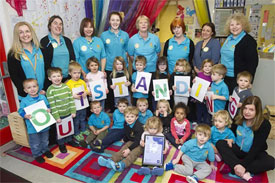 Commenting on the rating, manager Moira Grant said: "We are absolutely thrilled at receiving Outstanding.

"It is a real privilege to work with such an amazing group of children and to be a part of their learning and development during their most formative years."

She said it was the combination of dedicated staff and leadership, providing the best care and education for children, which had gained them the top rating from Ofsted.

In its report, Ofsted said: "Children’s behaviour is exemplary. Staff’s guidance and interaction are excellent. Children grow extremely confident and show high levels of self-esteem, which have a positive impact on their everyday well-being."

As well as an overall grading of Outstanding, Sunflowers received Outstanding for effectiveness of its leadership and management, quality of its teaching, learning and assessment, and for its personal development, behaviour and welfare.

Ofsted inspector Lynn Clements added: "Staff use their expert teaching knowledge and understanding of each child to plan varied and imaginative experiences that engage them. All children are making outstanding progress and securing the skills they need for their future learning in school."

Mrs Grant said that, since opening on the school site, they had received many positive comments from working parents about Sunflowers, which is open from 7.30am to 6pm, allowing many to return to work.

The original Sunflowers pre-school began in 1973 at Boxford Pavilion.

After fundraising for four-and-a-half years, Sunflowers was able to move to Boxford school.

In 2015, it became a community interest company.

She added: "These new types of companies are social enterprises that want to use their profits and assets for the public good."