Apple grower Boxford (Suffolk) Farms has won the national Top Fruit Grower of the Year title at the 2015 UK Grower Awards in London.

The family business, which also created the Copella fruit juice brand (later sold to Tropicana and now part of Pepsico) and the Stoke by Nayland Hotel, Golf and Spa, was recognised for the innovative technology and growing systems in which it has invested in over the last 10 years.

Particular focus has been placed on planting intensive systems, with environmentally friendly irrigation and the most suitable apple varieties - both traditional and new - all maximising and protecting yield while minimising the environmental impact. 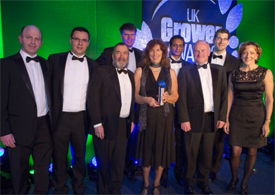 Robert Rendall, group director, said: "We are so excited to have received this prestigious award as a first time entrant, and to have all our hard work recognised in this way.
"As a team we challenge ourselves to be the best growers that we can be, in a worldwide market place.
"Our farms director, Robert England, and our highly motivated and capable team have delivered this and more with their energy, enthusiasm and dedication."
The term "top fruit" applies to apples and pears although the award category this year also included cherries, strictly a "stone fruit".
The UK Grower Awards, presented during a ceremony at the Grand Connaught Rooms in Covent Garden, also included categories for soft fruit, cider apples, vegetables, salad crops and ornamentals.