Controversial proposals to build 24 new homes on land near the heart of Boxford have been thrown out by Babergh council’s planning committee – against the advice of their officers. 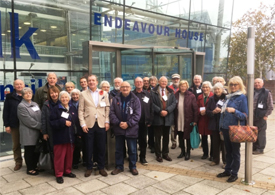 The committee rejected the proposal to build the new homes – eight of which would be "affordable" – after claims that roads in the centre of the village would not be able to cope.

They also heard that village services, including the primary school and doctors’ surgery, were already full.

Officers had said in a report that their recommendation for approval was "an extremely finely balanced decision" because of the concerns about its impact on the village.

Matthew Wooderson from Boxford Parish Council said that was unanimously against the proposal because of the impact of more traffic on Swan Street that would be the access to the development.

He said: "That is already very congested at school drop-off and collection times. It is the road that goes to villages like Groton and Edwardstone and more homes will just add to the problems there."

He added: "The parish council is not against any development in the village. We know it is a core village and we have actively backed new homes on the other side of the community – but this is the wrong place."

Leslie Short from Artisan PPS Ltd, the agents for the applicant, said there was a need for more homes in the village, especially the affordable homes – five would be for rent and three would be shared-equity homes.

He said: "These are high quality new homes in character with the village and we believe there is a need for them."

Suffolk’s County Council’s highways department had objected to some new homes in the area in the early 2000s – but now had no objections if the developers paid £10,000 for road improvements.

Local district councillor Bryn Hurren said this was seen as an insult to the village – and was also concerned about other services.

He said: "The school is full, the doctors’ surgery is unable to take any more patients on its list. This is a development that the village does not want and cannot take."

The meeting was the first Babergh planning committee to sit in the council’s new home at Endeavour House in Ipswich rather than at their old headquarters in Hadleigh.